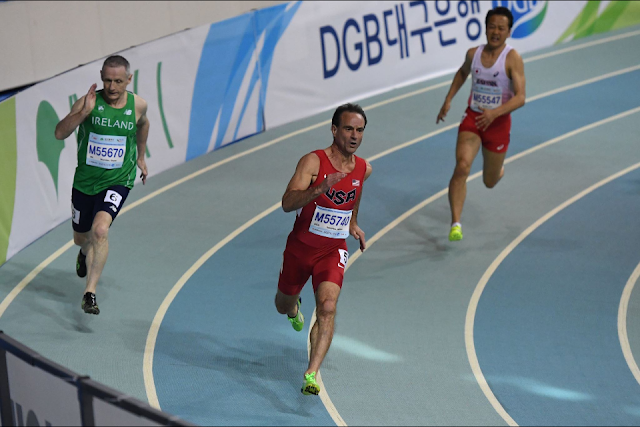 Photo by Rob D'Avilar - semifinal race.  With Shane en route to an Irish National M55 record and Toru from Japan.

It went pretty well.  This has been a long time in coming. I really never thought it would happen.  I must admit, it took a lot of work and pain to achieve this world title.  I'm fortunate for the opportunity  and that my body stood up to the test and didn't break down. This is what all those days out there alone on that track in the cold, rain, snow, fog, heat... and many times when I would've rather taken the easier path and stayed home by the fire with a cup of tea.  No one gets it for free.  It was worth it, not just the medal and title, but for the journey and meaning it's given my otherwise reclusive lifestyle. Competition can sometimes bring out the worst in people, but never in my masters track community.  I've never met a nicer group of overachieving individuals from such a diverse set of backgrounds. It is like a family, not only Team USA, but the world community of masters athletics. 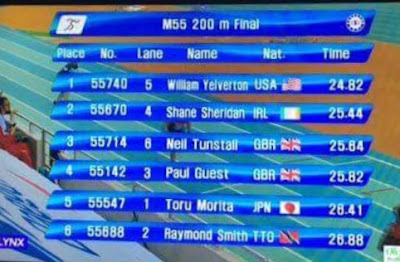 The Race
It went down as expected except I thought some of the others would have pushed me a bit more coming off the final turn.  I went out pretty hard but still had power coming down the second bank. I experienced a little tightening only in the last few steps. I won by 5+meters or so, it wasn't close. Shane took the silver but was a little slower than yesterday. I was just 0.04 faster. My second fastest  indoor 200m.  I enjoyed the medal ceremony and the post race hang. Watched some of the local pagentry and performances outside and ate Pad Thai.   Will write more later but am tired and the 400m starts tomorrow.  Signing off for now.