Warm and calm at the Sewanee track, upper 70ºs.   I did some resistance yesterday and was a little sore in the quads, probably from the new exercise, bleacher hops.

Did essentially 400m type training this evening, plus a little power.

I did the second split 400m with several min rest but not full... my heart rate was well over 120 bpm when I started the second set, and the last 100m really pushed my limit since the 2nd 300m was faster than the 1st.   Just getting that last 100m under 15 was brutal.

I did the bleacher hops in rapid succession.  Another way to do them would be to pause in between each hop and gather myself for a maximum push on each instead of using the momentum of successive hops.  Successive hops are a better workout as my quads were noticeably sore.

So that's essentially my main workout for the week if I intend on racing again this weekend.   Don't know if I should.  Hard to make gains racing every weekend but since I'm able, I think it would be ok to view it as just a workout and not to expect a faster time than last week.   If I didn't go to the meet this Sat. it would give me an opportunity to do a more substantial workout on Sat., but if it's just a 100/200, I may be able to resume workouts on Sunday as I did this week.  I'll again decide by Thurs., and plan to do a short speed and blocks workout then.

This coming meet looks to be just as cool as last week.  Already some of the pros signed up include: 2019 World Champion Steven Gardiner from the Bahamas running the 400/200 (ran the 6th fastest 400 of all time last yr 43.48), USA World 4x4 Champion Michael Cherry also running the 400/200, Mikiah Brisco - USA 2020 indoor 60m champion - she has run 10.96.  And... you never know who might show.  Two weeks ago Wallace Spearman raced (under a different name 'Wally Wallace' or something).   There have apparently been a number of pros that have walked in on the day of the meet and raced, but not formally registered on line.  They come sometimes a long way.  Cedenio came from Orlando, Norwood from Baton Rouge, Kendziera from SC.  So for me, only 2+ hrs isn't a long trip.  I felt bad for these guys last week because the elite 400m race, there was a timing malfunction and they got called back after racing about 150m.   They ran it again 25 min later, but Norwood opted to drop out of the 400m and run the 200m (in 21.1).

Posted by William at 9:06 PM No comments:

The ATL meet on Saturday was great.   I didn't get the times I wanted but that's ok, I'll be back maybe as soon as next Sat to try again.   It was just great to be able to sprint a 100m and a 200m again and survive it without any strains or injury.  I also got to hang with the pros: Olympian Machel Cedenio (4th '16 400m), Vernon Norwood (World Champion USA 4x4 team), David Kendzaira (5th Diamond League 400mH final).  Very small meet, only about 25-30 competitors on the track.  A bit too hot, low 90s that kind of sapped the energy.  Unlike last time, it was an easy drive, about 2:15. 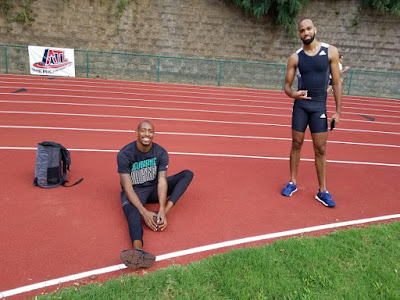 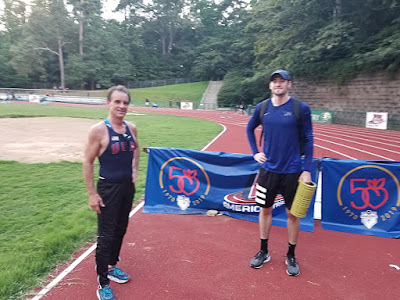 I felt pretty beat after the races, but well enough to do a decent workout today.  Usually rest day after a race but I wanted to rest tomorrow instead... I mean rest from running, I may swim, bike, and resistance.

I added these double leg stadium stair hops plyos... its not much of a stadium in Sewanee, about a dozen rows so I jump from bleacher 1 to 3 to 5 etc... every other bleacher in rapid succession, 6 hops to the top.  After several of these, it's a good workout.   Need to work on stuff like this, resistance tomorrow, and maybe some hills on Tues if I hope to improve my times a little.  Need to get lighter and stronger.

Just a little fast running today.  Warm and pleasant in Sewanee, 77º, light winds.  My wheels felt ok today so I entered Sat's meet.  Really just a training meet to see where I am on some shorter sprints.  I signed up for the 100m and 200m, but I probably won't run both.

Feeling ok, seems like I should be able to run 12.6 in the 100, or maybe break 26 in the 200, but we'll see if I survive it.  I've done so little short speed work this season so, it'll be a good training run.  Shorter sprints are fun if nothing breaks.
There are still races there the next 4 weekends.  We'll see if I have enough juice left to race some more... been training now for almost 7 months now.
I'm pretty light... 140.9 lbs after workout.
Yet another championship opportunity dissolves.... the 2021 USATF Masters Indoor Championship will not take place at the NYC Armory.  It may still happen, but not on that wonderful track.  Vanderbilt has a full slate of indoor meets beginning in Dec.  So, if the college stays open, maybe there will be an indoor season.
Posted by William at 7:16 PM No comments:

On the track today as Sewanee starts to become a bit more busy... kids playing on the field, the local elementary school has started.  Mid 70ºs, light winds.

Yesterday, I cut and loaded some logs for firewood, some weighing 100lbs, so I got some exercise.  I felt a little swelling, when I started warming up but it went away.

Was going to do more but I think if I'm going to race some short sprints, I should be: 1) healthy, 2) light.   So, I may race this weekend without a lot of work this week.  100m speed is somewhat innate anyway, so it wouldn't matter what I do on Thurs.  I will decide on Thurs if I feel up to it.  I should just do it to see where I am, and for practice, not expect a world leading time.  I may sign up for the 100 and 200, but may just run one or the other, probably not both.

Felt a tad 'cool' tonight, mid 70s and breezy, rain was threatening but never came.  My third workout in the '3 every other day' workout cycle before I take 2 days off from running.  I definitely need it as my L ham was a bit sore today.  I basically just ran 2 hard 300s today.


I think my ham soreness was due to the speed work I had done in spikes the last 2 workouts, plus the ham / glute sets of resistance work I did the other day.  Feel like I'm losing my edge a bit, a week of without any tempo, over distance, or speed endurance work... I don't really know if I can make any significant gains the rest of this season before I shut it down, however, I'd still like to run a 100 and 200m at some point.

After almost 2 yrs, I was actually able to post my results on Masters Rankings.  Good to be at top for the moment, but I don't expect to maintain the #1 World Ranking (M60 400m) as the EU opens up and more meets are held.

Nice evening, 80º and light breeze.  I felt good tonight, finally feel recovered from my race on Sat., and thought by some chance I might consider racing this weekend, but decided against it.   Can't expect my short game is going to improve in 2 workouts.

sprints from blocks from the 200m start on the turn:


My short stuff has been remarkably consistent, not fast enough.  I should be able to break 13 on the turn from blocks in a 100m, since I ran 12.4 on the straight in training shoes last March, with a tail wind ... but still.    I'm not running that fast in the short game right now.  I need to up my resistance work, maybe some plyos, and maybe some aggressive hill sprints.   But, I can't keep putting on the spikes every workout and go all out, it's too risky.  Just some hard training and try it again.  I've got to be able to go 19 flat or less in a 150m, that means 12.6 or so in a 100m on the turn.

Posted by William at 9:04 PM No comments:

Returning to the track Tuesday on a nice evening, mid 70ºs, calm to light winds.   I wanted to work on speed with the idea of a possible 200m race soon, but I don't think this coming weekend I'll be ready after just one more workout.


I had intended to run 150s from blocks and was disappointed at the time, until I realized that I was really running 155m.  So, the 150s would really have been somewhere around 19.17.   This time would be about a 25.8ish pace... not really where I want to be.  I really need to be 19 flat or less if I want to confidently run in the 25s.  Weird that my times were so consistent.  I put the trainers back on and  finished with a short tempo set of 100ms with an emphasis on form.

...But, I'd hate to drive 5 hrs and run a 26 in the 200m.  I think I need more training, some resistance work, and speed.  So, I'll probably wait til the Aug 8 meet.    Since I didn't do much Sunday and Monday, I might be sore tomorrow.  Probably swim and do resistance work tomorrow.

Email ThisBlogThis!Share to TwitterShare to FacebookShare to Pinterest
Labels: schedule, track meet, training log
Older Posts Home
Subscribe to: Posts (Atom)
“Keeping your body healthy is an expression of gratitude to the whole cosmos — the trees, the clouds, everything.”