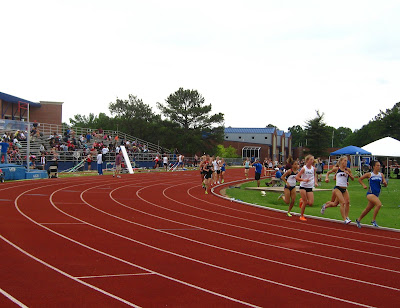 A decent performance but short of my goals. 56.64 for the 400m was a new personal record but only by .07 sec.
I felt weak before the 200m and was a bit nervous that I might strain something. My 25.57 time was disappointing, but still 5th ranked in the USA M50 Masters Rankings and .13 faster than the TN Senior Games State Record. I'm fairly confident that I may be able to break 25 when I'm fresh, and I'll just have to train harder!
I think my 200 split in the 400m race was pretty close to my 200m race time.
I haven't done much power work to get ready for the 100m and 200m, but I expect to run both in Huntsville on 5/21... my next opportunity for an FAT time. (...that's Fully Automatic electronic Time, as opposed to 'hand timed').
The best news is that I am healthy, strong, no strains, and I can up the quality of my workouts and hopefully make some improvement.
I was hoping to go under 56 in the 400m and 25 in the 200m. Close but no cigar. My 200m time missed the All-American Standard by just 0.07 sec. Next time!
I am astonishingly light: 135.2 lbs. That puts me at 9% body fat. Now, to build some muscle.
I'll be able to get one good hard workout on Mon before running in the Chattanooga District Senior Games on Thurs. This meet will essentially be just a time trial for me. There will be no competition which will make it hard to run a good time. It will be hand timed so nothing super official but, the Masters Rankings do accept hand times for rankings in races 400m and up.
Running in lane one for the 400m is not so good. Maybe Thurs I'll try a middle lane.
I'm pretty sure I was the only Masters racer (old guy) there, probably the only competitor over 23. I had some fun conversations with other athletes, they always addressed me as "sir." Good kids, very polite, respectful and encouraging. I could be 10 years older than most of their parents. I consoled a girl who was crying her eyes out after a disappointing performance. I told her it's a gift to be healthy and to participate. She smiled.
Posted by William at 5:34 PM No comments: 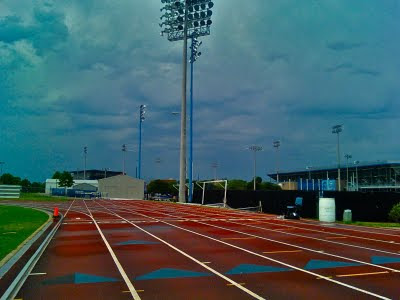 During a break in the severe storms this morning, I was able to get in a workout. Felt like running in the eye of a hurricane.
Today, more reps, a tad slower with less rest between reps.
Felt a little bleary after getting up with the tornado siren at 5:30 am, barely getting back to sleep before getting up again at 8:30 and on the track by 9:15.
Thankful for a break in the storms, I hit it:
800m warmup and sprinter school drills
spikes on
4 x 200m - 31, 30, 31, 30
strict 90 sec. rest in between
5 min rest between sets
4 x 200m - 31, 32, 31, 32
strict 90 sec. rest in between
5 min rest
400m - 69
Felt good. Experimenting with stride I found that increasing turnover with shorter steps is more effort and less efficient than striding big, even though it may add a slight bit more speed. Maybe ok for a 10om but nothing longer.
Hoping to see my name on the heat list for Memphis tomorrow.
Posted by William at 8:38 AM No comments:

After a good experience at the Vandy Invite, I've pretty much convinced myself to run the 400m and 200m at the Memphis Invitational this coming weekend 4/30. This is something I hadn't planned on ... but ... I'll be on VACATION!!!! Just 3 more days of school.
After a great Easter meal with Iska and her parents - salmon and broccoli , with chocolate mousse cake with whipped cream and strawberries for dessert, I'm happy to still weigh 137.4 lbs after today's workout.
I didn't take the day off Sunday, did core and upper body.
So.... back to the track this evening!
800m warmup and sprinter school drills
spikes on
long sprints at 85% effort:
2 x 300m - 43, 46
3 min rest in between
5 x 200m - 29, 30, 29, 28, 30
3-4 min rest in between
The 3rd and 4th 200 felt easier than the first.
Thanks to Mark Carver, I got an invitation from the Greater Philadelphia Track Club to participate in some masters relay teams at the Masters Nationals in July.
We'll see. Because of the schedule, I will have to choose between running the 100m and the 400m at the Masters Nationals. I much prefer the 100m and I haven't been timed but once in that event. I am 5lbs lighter and stronger now, so we'll see what I can do. Next opportunity for an FAT 100m time will be May 21 in Huntsville, AL. I'm going to stick with the long sprints for this weekend and next week begin a transition to more power work.
Tomorrow, resistance. Good thing, looks like a stormy day.
Posted by William at 6:36 PM No comments: 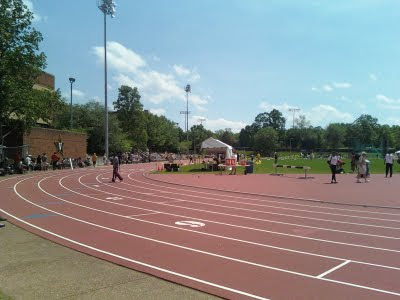 Not too bad for the first outdoor 400m race of my life.
56.71 is the 3rd fastest 400m in the USA so far this year for men 50-54 and exceeds the TN Senior Games Record by 0.29 and qualifies for the All-American Masters Standard for Excellence in the event for my age group.
A good start. Maybe I should take this event more seriously? I was really doing the long sprints just to recover from my hamstring injury. I think I'll keep doing them. I've definitely recovered from my strain.
Running from lane one, I stayed with the pack for the first 200m and really was hurtin' down the home stretch... I estimate my splits at somewhere about 25, 31 ish.
Painful race, but the pain is short lived. I feel great and encouraged. No strains or injury... and that in and of itself is a win. Maybe I'll do better when I get rid of this chest cold.
Posted by William at 2:10 PM No comments:

SHIT.... I'm in lane one tomorrow for the 400m at the Vanderbilt Invitational. Lane one feels like a slow lane, it feels longer, more turn to run and a tighter curve. One study said:

Glad I found out I had lane one before my workout today so I could practice some block starts in lane one and run that curve. Here's what I did today.

1 mile warmdown jog
I don't want to set too high of an expectation but I'd certainly like to go under 59. That should be well doable.

My target body weight has been achieved!! I was 136.2 after the workout and will eat a good protein low residual diet today and should be 136 by race time. I am about 9.7% body fat at race weight.
A great pre race day meal is a Vanilla Spiru-tein protein shake with cinnamon, apple flavored Hammer Gel, stevia sweetener, water and ice. Delicious. I can't emphasize enough that just because I've lost 23-24 lbs since the first of the year, I am NOT hungry. Intelligently knowing how to feed myself is a great thing ... very advantageous to health and athletic performance.

Meet schedule for April - May

Track Meet Schedule for the next month.

The district Senior Games events will be hand-timed and offer little or no competition. Basically just a required time trial for the State Senior Olympics in July. The 2 others are USATF sanctioned.

Posted by William at 7:40 PM No comments: 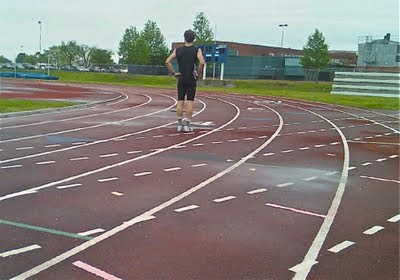 The severe storms of last night moved through and left a nice cloudy cool morning for a workout. I felt weak as the cold has gotten into my lungs, but I think I'm getting over it fast. I've drank over a gallon of juice in the past 2 days. During my 800m warmup, I felt old and pained, but as I started my dynamic warmup, which always produces a good sweat, I felt better and was ready to fly.
Lighter workout today...
2 x 300m - 45, 45
3 x 200m - 28, 29, 30
The first 300m was not too hard, about 80%. After 4 min rest, second 300m was painful, about 90%. 200m was about 85% except I would begin pushing it toward 95% in the 1st half of the last 100m, then back off.
I have been experimenting with stride length. It seems that greater effort sometime translates to faster steps and shorter stride... which may have diminishing returns. When I'm fresh, it seems to take not much effort to stride a 28 sec 200m - about 80%. Sometimes it seems like I'm a vehicle with just 'one speed' where it takes much effort to run faster than my 'standard one speed.'
Weight is good, about 137.4. Should be at my target race weight by Sat - 137 lbs max.
Posted by William at 8:07 AM No comments:

My damn cold is becoming a chest cold and I'm going to need my lungs on Sat., so I hope to get rid of this soon. 2 sets of resistance work today, will do one more tonight. 2x2 different quad/hip flexor exercises - 35 reps, 2x2 different hamstring exercises, 45 reps. 3x15 squat leaps.
Looking at last years Vanderbilt Invite... the slowest time of ten 400m runners was 50.65! I will be running alone for certain, especially if I'm in lane 1. There will be women at this meet faster than me.
I remain undaunted. Endeavoring to persevere!
I wanted to hit the track tomorrow but it's supposed to storm severely. Maybe tomorrow night.
Posted by William at 5:37 PM 1 comment:

These are some good dynamic warmup exercises for the sprinter:
Video 1 - muscular warmup and coordination
Video 2 - flexibility
Video 3 - basic dynamic warmup
Posted by William at 11:21 PM No comments:

12 days after my hamstring injury, I commenced running workouts on April 6. Prior to this, I did a lot of strengthening exercises and light stretching, especially in my hot tub, an absolutely indispensable aid to warming up.
These first three workouts were done on the street - straight away 200s and 400s which tend to be about a second faster than track times for 200m and 2 seconds for 400m - (since running on the track involves running turns).

My plan is to run the 400m race at the Vanderbilt Invite on 4/23. I've learned it's best to do running workouts every other day and resistance on the days in between. I plan do one hard day on Monday morning (probably 4x400 @ 65) and light days on Wed., and Friday. I'm not sure if I'll take 400m running seriously. We'll see how it goes.

The subtitle of this, what may largely become a "training blog," comes from World Master's Champion sprinter Bill Collins' book: "The Ageless Athletic Spirit." An inspiring book for all those who seek that 'inner ageless athletic spirit.' I will be quoting his book from time to time.
This blog is for me to take an organized approach to my training and for those fellow Masters athletes who'd like to share advice, stories, and experiences.
After a short stint as a 5k runner, I've come firmly back to my roots as a sprinter. I will endeavor to compete in sprint events no longer than 400m. I've found that sprint training, which does not involve lengthy distance running foundation work, is better for me in the long term, and is a 'whole body' approach that involves upper body strength, cross training, and core work. Off season foundation work for sprinters never involves running more than 2 to 3 miles at a time, and most seasonal running workouts involve track intervals. Racing is hard on the body and like drag racing, it's risky. All running workouts for the masters sprinter do not or rarely involve 100% full speed sprinting. That is reserved for competition.
I'm going to retroactively post my training history starting with my first workouts after suffering a hamstring strain during the 3/26 100m race at the Vanderbilt Black and Gold meet.
Best of luck to all Masters Athletes... stay healthy.

"Why run far when you can run fast."
- Bill Collins

Email ThisBlogThis!Share to TwitterShare to FacebookShare to Pinterest
Labels: Bill Collins, injury
Newer Posts Older Posts Home
Subscribe to: Posts (Atom)
“Keeping your body healthy is an expression of gratitude to the whole cosmos — the trees, the clouds, everything.”