Unfortunately my MacBook computer has died, at least the Wi-Fi capability has and I can only post to this blog from my phone.   Very thankful for this old iPhone 4s right now as it is my sole link to the outside world. Even though I don't have phone service I can still use the GPS on his phone and it has helped me a lot.

I ran 25.05 today, the fastest qualifying time in the preliminary round.   I wasn't going to run fast today but they combined the heats and I was put in with some faster guys.  They reduced the number of heats from 11 to 5 and only two semi final heats ... so I decided to let it rip.   The problem was Koreans especially not showing up, and some injuries.  Next fastest time in the pre-lim was 25.82 so I'm fastest by quite a margin.   Some of my competitors went down today to disqualification because lane violations and Rudy had an injury.   I thought Rob would be my toughest competitor since he won the 60, but he was beaten by Ray by a half a step and was DQ'd for a lane violation.  Ray was a full second slower than I was today.

I was really lucky to get lane five today.  Rudy and Shane were not so lucky, both got lane one. My main  competitor in my heat was a German who was running tough with me from lane six. I was hitting the final turn about the same time with him but as I passed him, his extra effort caused him to pull a hamstring and he pulled up, but at least he made me run faster.  With the German DNF, I won my heat by 15 meters.

As top seed again, I got lane five tomorrow in the first heat of the semi finals.  I have some good competition with Shane from Ireland in lane 6, two guys from Japan in 3 and 4... Toru who beat me in Perth, and Yuji who won the silver in the 60m.  Rudy is in lane one but he told me he may scratch because of a knee issue.

Unfortunately, the Korean live stream television video is not archived, so I can't take video and screenshots to post, perhaps it will be later but is not accessible right now.  So, due to my dead computer, these posts may be a bit less colorful and more cryptic.

Bottom line:  I can win this thing if I execute and avoid injury. So far, no problems despite the unfortunate call room situation (outside in the cold in a tent, long waits, cramped warmup facility, etc) ... but anyone who has run the Penn Relays knows about situations like this. 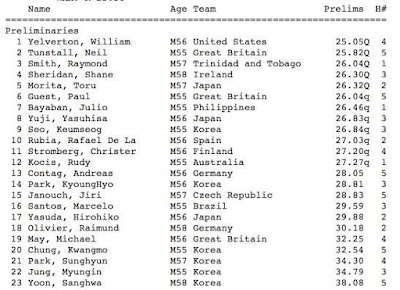