The long flight
Flew on a 747-400, it was OK but actually less leg room than the regional 737 that I flew from Seoul. The food was ok and I had a window seat.  It was a full flight and we flew non-stop from Detroit  -due north over Canada, Hudson Bay, and the North Pole.   We then came over land in northeastern Siberia, south to China then, a slight jaunt west to avoid N. Korea then to Seoul.  We never left sunshine and I was checking out the scenery regularly.   After an hour into Canada, for the next 10 hrs I saw no visual sight of human habitation, all a frozen wilderness.   First sight of humanity were some roads and power lines in Siberia.   It's part of the world many never see.  I took this photo over the NE Siberian wilderness from the plane.


I had read that this track was built for an IAAF World Championship meet but because the warmup track wasn't long enough, they moved it elsewhere.  There are 2 warmup tracks, one is indoor/ outdoor and is about 130m.  The indoor warmup area is too small, 50m and pretty crowded.  Here is the indoor/outdoor track ... with a massive WMACi sign. 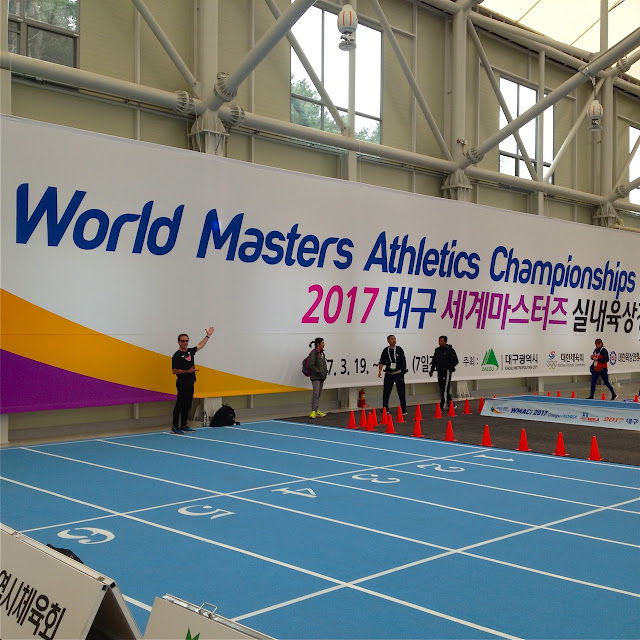 The outdoor part is set up like a street fair with vendors, a performance stage, and a carnival atmosphere.

Friends
Met up with my team, hung out with Ben, Marcus, Robert, Antwon, and a few others.  It's team captain Phil's birthday today.  Chatted with Shane from Ireland, Roland and Andreas from Germany, Toru from Japan, Rudy from Australia.  These are 2 of my stiffest competitors in the 200m (they both beat me in Perth).   I stayed to watch their 60m prelims.   They looked good and won their heats.  All were around 7.9s.   I'll post later when I see how their semis go.  Much more to come....