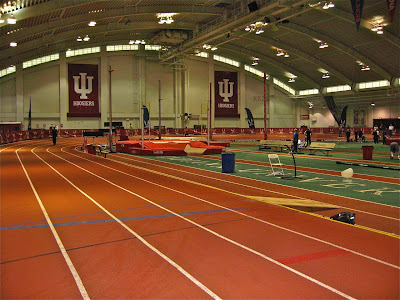 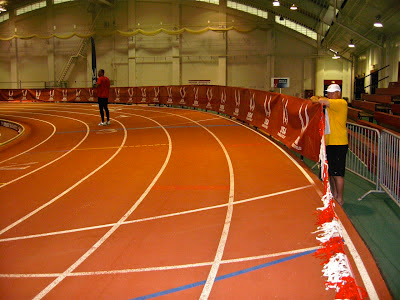 In Bloomington, IN. I was just remarking to my dad that I'll likely be the only athlete here that has performed in Indiana University's Auer Concert Hall, and on the IU indoor track.
Not well known outside of academia, but Indiana U. is one of the top ranked Music Schools in the nation. I was remembering the pressure I felt before my solo guitar performance at IU's International Guitar Festival in '10. It went well and I got through it.
IU also has a powerhouse collegiate track program.
Tomorrow's performance will involve a lot less pressure and anxiety. Should be fun.
What struck me immediately about the track at the Harry Gladstein Fieldhouse at IU was the steepness of the banked curves. There is a rather dramatic uphill going into the curve and downhill leaving. I have never run on such a track. The lanes are the widest I've ever seen on an indoor track. The Mondo track is a little chewed up but nice and tight, springy. I like it.
The 400m is tomorrow. I'm inclined to go out fast since it is really hard to pass after the break. It's a risky strategy but it may be my best shot to be most competitive. We'll see how it goes.
Posted by William at 6:34 PM