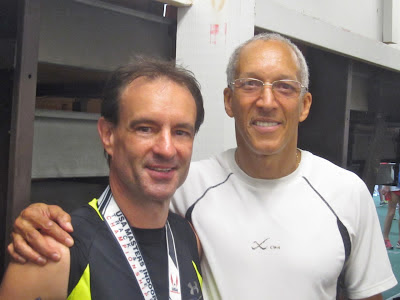 This is a photo of Bill Collins and I.
His inspiration and book has help guide me in this Masters Track journey. The motto and title of his book, "The ageless athletic spirit" is the sub title of this blog.
Bill has so many world championships and world records, I can't begin to even list them. At age 61, Bill set an M60 World Record in the 60m dash 7.58 - and I don' think he even used starting blocks. Bill's winning 200m time was 24.53, faster than the 2 younger age group champions (M50, M55). All this after being diagnosed with a rare neurological disorder. He went from being in a wheechair in 2011 to setting a world sprint record this month. Great story on Bill. Amazing comeback, not surprising if you read his book. Not his first comeback. He looks great.
Thanks Bill, and good luck in the Worlds.
Posted by William at 11:04 AM