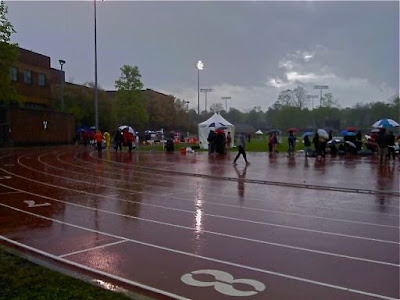 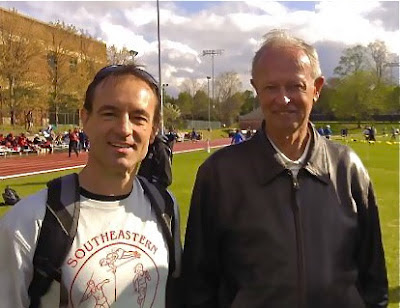 I saw it coming on radar.
I thought just maybe, I'd get my 400m heat in before it hit. I was in heat #5 - the last heat (slow heat). By heat 3, it started to sprinkle. By heat 4 it was raining. As I was adjusting my blocks, it hit. Wind, heavy rain, the temperature dropped from low 60sº to low 50sº. 'Why couldn't they wait just 5 min,' I thought? No lightning, so we went. Wouldn't have mattered, it rained hard for 20 min.
There were two real fast guys in my heat and 2 slow guys. I got a decent start, but just as I hit the end of the back stretch, rain was hitting my face so hard my contact slipped off my eye. I shut one eye and attacked the curve. I passed one guy on the turn and another guy coming off the turn, the two fast guys were 10m ahead. They beat me by about 20m and I beat the two slow guys. 55.79 - was my second fastest 400 but I was pissed I didn't get a PR. Surprisingly, the traction in the rain was OK, but I think the force of the rain hitting me could've easily screwed my chances at a PR. I missed it by just 0.25. A lost opportunity on probably the best track in the state.
The weather cleared for the 200m. My 200m sucked - 25.50. Same shit. Good start. Ran a great turn, faded on the straight. I was winning the heat at the end of the turn and got passed. There were just 2 other guys in my heat since many people scratched and went home when it rained. I've got to do something about this. (I'm thinking more speed work - some fast 150s).
The Vandy Invite in April has the 200m on Friday night and the 400m on Sat. That will be a good time to go after a 200m PR.
It was nice to hang with Coach Dean Hayes (photo above) and the team. In his characteristic dry sense of humor, Coach said to me, "I see you made it to the finish."
Disappointed about the failed PR attempt, the substandard 200m, and the weather ... but for a first outdoor meet, it set a pretty high bar. My 55.79 is by far the fastest time in the M50 USA Masters 400m Rankings - but the season is very young.
Great to run with the college guys ... and girls. 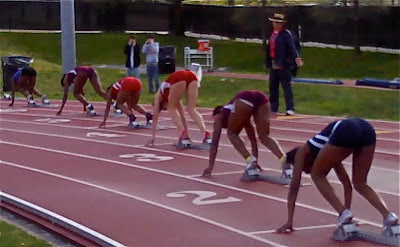