The weather has changed. It's dry and cooler, clear. Was in the low 60sº at sunset this evening on the track. I warmed up slowly, and ran an easy negative split 400 a few 80m striders and many starts from the blocks.

Down at race weight: 138.6 after workout. Also, at Walmart last night, I checked my blood pressure and pulse: 106/65 and 52 bpm. 52 pulse is comparable to when I was running 5ks back in '08. That's low for me. When not in shape, my pulse is usually about 72.
Nice to know I can run a 64 sec. 400m with a very meager effort. Leads me to believe I could run a respectable 800m - which I may attempt at SE Masters. When racing, there is that magic few seconds - about 8 sec into the race where I'm cruising at near full sprint, yet I've not started even breathing hard. It would be nice to be able to prolong that period another 20 sec.
Interesting to hear the other runners breathe in a race. I distinctly remember that in the outdoor 400m National Finals - going into the last turn - and the footsteps, like a herd of horses. In my last race at Vandy, one of the guys I beat emitted an indescribable sound of pain in his breathing when I passed him coming into the homestretch ... definite vocal distress. I knew he was in trouble at that moment and he began fading. It's like Latif Thomas said, there is a very brief moment in the 400 at around the 200m mark where one has to make a decision. The choice is: 1) attack and commit, "gimme more pain - I want it" ... or 2) "this friggin' hurts, it's not gonna happen today." He also said, the last 100m is almost uncoachable. It comes down to 'sheer will and determination... how bad do you want it.'
This meet on Sat., the Governor's Invitational at Austin Peay State University, looks like a very small affair. Last year, they only had about 4 colleges there. I'm sure there will be some colleges there, but not many... not that it matters. There are big meets this weekend at Auburn and other places that are attracting most colleges. This meet should go pretty quick, probably not more than a few heats per event. The track is not great but it's ok. Conditions should be good. Last time I went, they had trouble getting the computer timing to work. They had better not have trouble with that again. I don't want to drive 90 miles for a hand time.
Watching the World Masters Indoor Championships in Finland. My relay mate Scott, took 7th in the 200m, but his time was a half second slower than he ran in the USATF Indoor Nationals. Bill Collins is again a World Champion in the 60m and 200m. There are 3 rounds scheduled for the 400m, so far, 55.97 was the fastest first round time. Shoulda went.
New Masters meet possibility: Puerto Rico Masters Grand Prix - July 21-22. What's unique about this meet is that there is prize money: $200, 100, 75, 50, 25 for places 1-5. However, Puerto Rico would be a hellish place to run a 400m race in late July (couldn't be much worse than Nashville or Birmingham), and it would cost me about $800 in hotel and flights to enter. It's at a perfect time: 2 weeks before the Masters Nationals. It's a beautiful setting - right on the beach. The hotel, stadium and airport are all within a mile or 2 of each other, right on the water. My only other meet in July is the TN State Senior Games on the previous weekend, which is utterly noncompetitive. We'll see.
You can barely see a piece of the orange/red track on the extreme upper left of the photo. Nice setting. 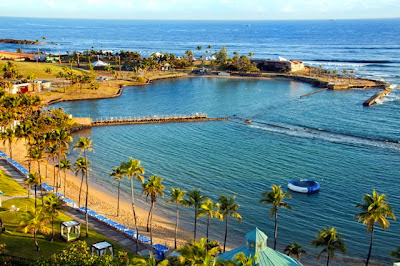