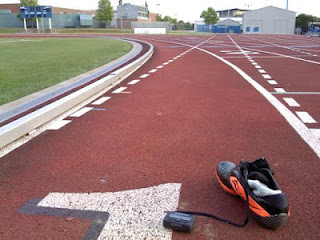 Today I did long sprints fast, with an emphasis on form and float.


A cold blustery eve on the Dean Hayes track ... in the 50sº but with a stiff breeze and feeling much colder.

MTSU is taking 20 people to the Penn Relays.   I hope to see some of my friends on the team waiting in the wings to run the 4x400.