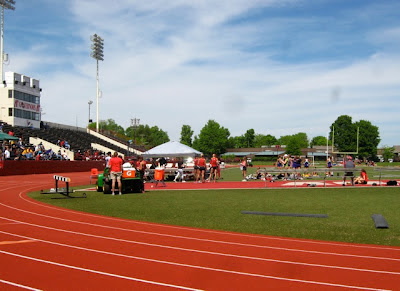 PRs!
400m: 55.14
200m: 24.94
This was a tiny track meet. Essentially a college duel meet between Austin Peay and TN Tech. More than twice as many women competing than men. (Title IX ... and all that).
There ended up being only two men's 400m contestants, others scratched. So, it was a match race between me and a college guy who usually runs 53s. Glad the kid ran, because if it were just me, they may have cancelled the event. Unfortunately, I was outside of him and never saw him until he passed me coming off the final turn. I was in lane 6, he in 5. This one hurt. More than the others. I really committed hard on the last turn but felt nearly rigged up in the last 50m - the point where I received the customary "piano on my back." I estimate my splits to have been 25.5/29.5 ... or maybe 26/29. The kid ran 52.93 and his splits were about 26/27.
It seemed to take a long time to recover after the 400 race, I was spent. Due to the small meet, there was less than an hour between the 400 and 200. Setting my blocks for the 200, I still felt the 'queezy shakies' from the 400. There were 4 in my heat and one guy (of superior genetic disposition) totally smoked the field running in the low 21s. It was almost comical how fast he passed me on the turn. I held my own against the other 2 college boys although they beat me, but not by much. I was sort of dreading this race since I did not feel recovered from the 400. But, instead of scratching, I ran it thinking it would be a good training run. After blasting out, I felt light-headed on the turn, but some unexpected boost of energy seemed to kick in and I felt really pretty strong coming down the straight. Surprisingly, I did not feel really that much fatigue toward the end. It was a PR by .32 seconds. Unexpected.
It was a good outing. Not the fastest track - a water permeable Polytan track, kind of soft. It sure would've been more satisfying to run 54.9 than 55.1 ... but I'll take it. Still fastest this season in the USA M50 .... and a PR by .40 sec.
My weight is good, was under 140 lbs for the race.
Posted by William at 1:52 PM