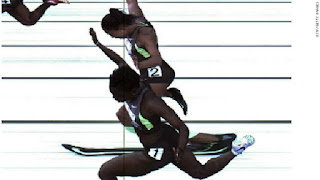 How often does Track and Field take top headlines on CNN?

Since the advent of FAT (fully auto timing) cameras that record the finish at 3000 frames per second, a tie in the US Olympic trials has never happened... until yesterday in the Women's 100m Final.   This has forced USA Track and Field to adopt a new tie breaking rule.

1) coin toss -  rules detail who gets to pick heads or tails and how the coin should be flipped.  A US quarter will be flipped according to the new rule that states: "The USATF representative shall bend his or her index finger at a 90-degree angle to his or her thumb, allowing the coin to rest on his or her thumb..."

2) Race - If the run-off also results in a dead heat, the tie will be broken by a coin toss.

3) one competitor will decline the leading position, and in this case, a spot on the Olympic team in this event. (unlikely)

They even have a protocol if the coin falls on it's side: " In the event that the coin does not fall completely on either the obverse or reverse hub, the USATF representative shall repeat the toss process as described above."

This last rule contingency would favor an uninjured athlete over an injured athlete.  For example, if one athlete were injured and prefered a coin toss, the other could force a run off race.

Did a little resistance, stretching, and massage yesterday.   The ham doesn't seem to be improving as quickly as I'd like.  It's tight.   I'm probably a week away from being able to run fast (under 27 sec 200m or under 60 sec 400m).  I would have trained this morning, but Iska was here, so I'll go tonight.   Still heavy after a weekend of partying.
Posted by William at 7:37 AM