The race for the Gold was won by James Lawson, as expected in 54.00.   He got World Champion Marcus Shute coming up the home stretch in convincing fashion, by about a half second.   The rest of us were far behind ... me, Nix, and Bynoe all within about .20 for the Bronze.   I was the loser, choked.

I was hoping I'd be in the slower heat with a better lane so I could run unhindered, but Proctor scratched, moving me into the fast heat.  All the other heats were way slow... 58+, this was the championship heat.

As shown in the first photo, my big mistake was to be 'too courteous' to Sunder Nix after the break.  I should have cut him off before the third turn since I had the inside lane, making him run outside.  I probably gave this '84 Olympic Gold Medalist a bit too much 'respect.'  Anyway, I paced pretty well,  ~ 26.25 was my first 200m split but it could have been .2 faster. 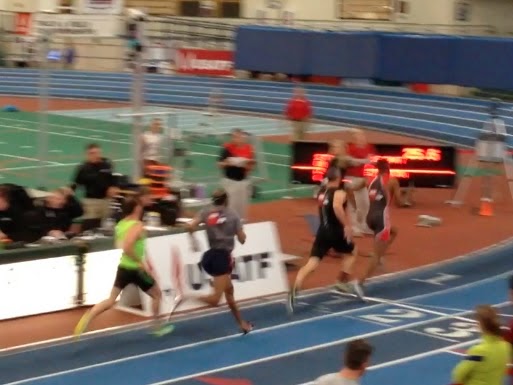 The photo shows the 2 separate races. I felt I had enough to have passed Nix on the back stretch but I held off, it cost me a few tenths.  I was surprised that I was so close with him, considering his background (running 44.75 in the '84 Olympic 400m Final). Anyway, if I hadn't had someone in front of me, I might have had a shot at a faster time.  Bynoe - an 800m guy came from behind and got us both in the end. It was very close, Nix got me by .07 and Bynoe by .23 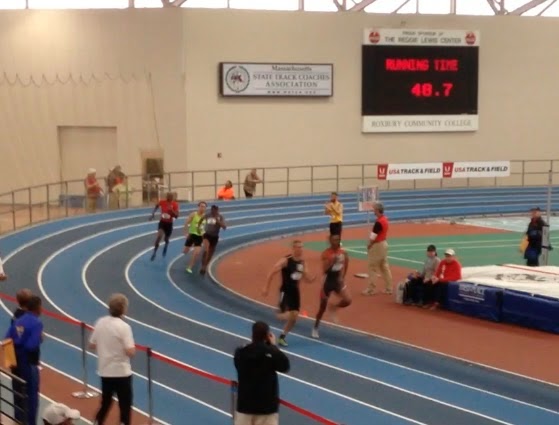 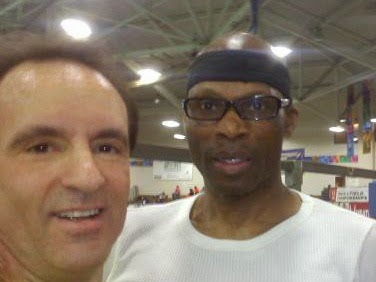