The Upper Cumberland District Senior Games was a good opportunity to run some full speed trials on a nice track.  TN Tech University has a nice facility.   The order of events was a surprise.   I expected to get this over with and be out of there by noon but they ran the 400m and the 800m and took 2 hours to do field events.  My times were ok, nominal. 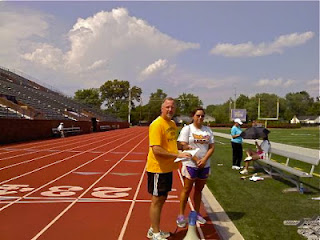 In the order of events:

Even though this was hand timed, the 400 and 800 were extremely accurate since they were timed by the same guy who shot the starting gun, Tony Cox - the TTU coach, an experienced timer.  So, there was no time lost to timer reaction.    Thanks to Coach Cox (photo), he was out there all day in the hot sun, running this meet, probably volunteering his time.  I was often in my car with the A/C on, listening to satellite radio.

100m
There was 2 hour break after the 800 while they did field events.   I got stiff and tight and was pissed that it was taking so long.  I kept warming up thinking we'd go, then had to wait.   Finally, we ran the 100m and ... it was a trip.  I never saw anyone, but right after the start, I heard some painful yells and commotion behind me.  We started with 6 in the heat but only 4 finished.  One guy apparently ripped a hamstring and went down hard, got up bleeding.   Another guy pulled up lame and was grabbing his crotch.   It wasn't a pretty sight.  I felt good, no strains.  A decent start.  I felt sorry for those injured.  You can't expect to run a 100m sprint with no preparation.  For some of these guys, this is their one a year competition and they have no idea what they're doing.  I won the race by 30m.

Inventory
I left for this meet unusually heavy, 141.8.  When I returned, I was 139.2, lost 2 1/2 lbs during the day. Last night, I mus have ate close to a lb of salmon.   Same tonight, except it was shrimp and salmon.  Salmon in a lemon-maple sauce rolled in toasted ground sesame seeds.   Good, very tasty.

Going to do some resistance tonight before I sleep.  Need to so I can keep injury at bay. Tomorrow, probably more long sprints, probably in the evening.

I had forgot to pick up my medals... some guy chased me out to the parking lot to give them to me.   My first quadruple gold...  heh ... big freakin' deal. 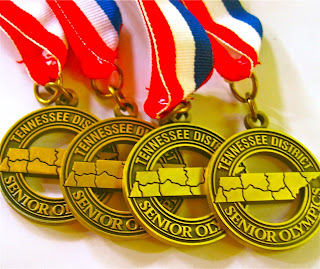