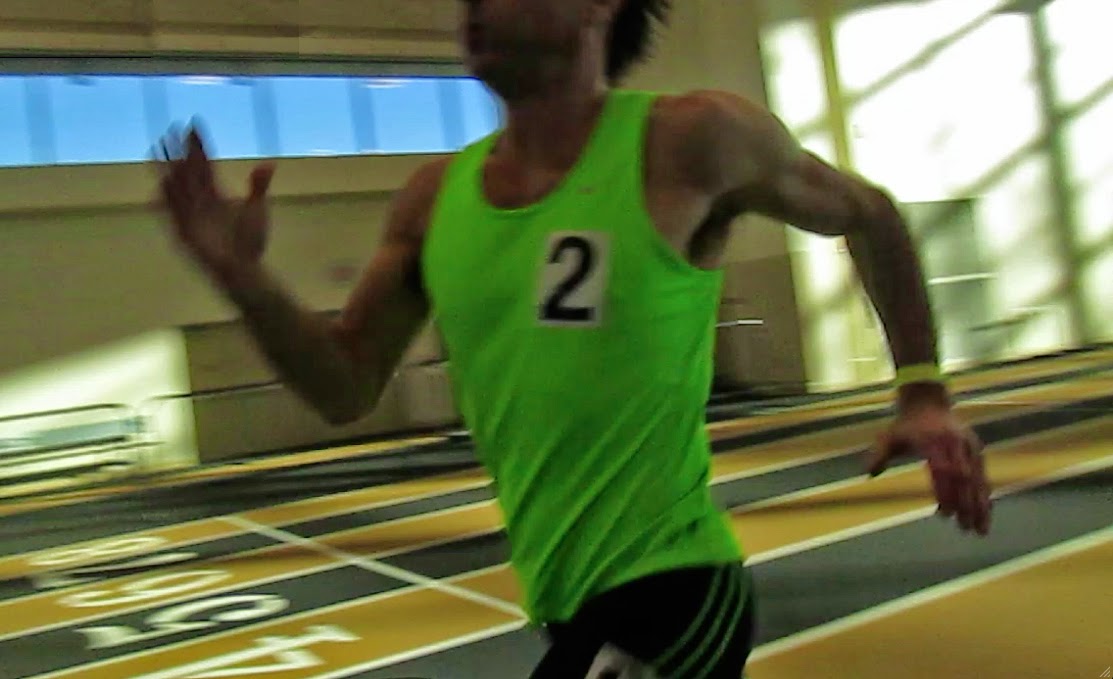 
Who woulda thought?  Setting PRs in the 400m and 200m, indoors, with a sore ham, and running three races?  The 400m is presently a WL indoor time, in an age group I'm just about to leave. Yea, definitely a fast track.   I really don't think it's possible for me to run much faster this indoor season since there will be no other tracks this fast.  But still, after 4 seasons of masters track, to get faster at age 54 ... soon to be 55, I must be doing something right.  Or maybe it was a fluke?

The 60m race was unremarkable, 7.80.  0.05 slower than first meet, but still faster than I ran at Nationals in '14.  An OK start.  I wrapped both thighs for protection because my left ham was still sore from a plyo workout last week.  After the race, I was in the training room with a heat pad on my sore ham.  I actually didn't finish last.

The 400m went well.  I paced it perfectly so I didn't rig at the end and maintained a good relaxed pace, pretty much running with the pack in my slow heat until the break.   I was 4th out of 5 at the break and we spread out enough on the back stretch so I could run unimpeded in lane one.  The guy behind me made a move to pass on the last turn but I held him off and he faded badly and fell far behind.  Like all good races, I was whipped at the end but not sick and heaving. It would have been really instructive to know what my splits were, but I don't.  I'm thinking 26/29.  I was surprised at my time but a little greedy that I missed "running my age" by 0.12 sec.  54.98 would have been better.  I really doubt I can top this, especially indoors.   After the race, I retreated again to the trainers table for a hydroculator heat pad on my ham.  Again, didn't finish last.

The 200m was most surprising, considering it was an hour after the 400m, and I was really quite sore.  This race I barely warmed up for and was going to do it just for a workout.  I was in a slow heat and in the inside lane.  The guy on my right was very close to my speed and I fought him all the way to the end, which probably helped me.  He beat me by a 0.10, and I did finish last in this event but holy shit, a PR.  24.80.  This is only the third time I've run under 25 (F.A.T.)... and to do it indoors.  Surprising.

I'm half inclined to rest and not compete for a while but Birmingham is next weekend, and it's probably the second best indoor track I'll get to race on.  That said, I doubt I can run faster there considering the need to recover and cycle up to another peak, takes time.  We'll see.  Just a workout.  I might see Marcus and Don there, fellow world class masters, so I'll probably go.