Tales from the track 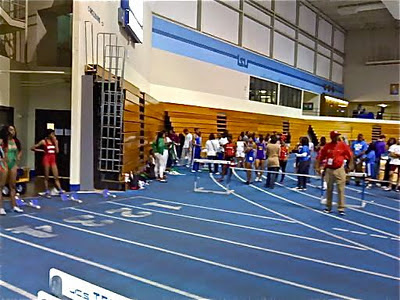 I have to relate a funny story from the Ed Temple meet.
But first...
What was interesting about this meet was that the venue announcer was also a DJ, who after the start of the race would play Hip-hop music during races. Hip-hop music is an indelible part of culture these days, particularly in the black community, and of course, appropriate at a historically black college like TSU where the meet was being held. It seemed odd at first, but I really started to dig it. It is a great cultural experience for me to participate in this meet where, as a white person, I'm a 3% minority.
Here's the story...
In the finals of the Men's 55m, I was standing near the start line. A lot of guys were standing around posturing, blasting out practice starts, adjusting blocks, and basically 'shuckin' and jivin' while the track and clock were being readied. There were two starters, one with the start commands and one watching the line for false starts. The starter gave the commands and the runners blasted out ... but a second gun sounded signaling a false start, which means disqualification. After the starter held up the 'red card' on lane one, the embarrassed runner, all smiles, was taunted by the gathered crowd of teammates and runners with yells of "HAAAA!!!" and funny verbal pokes. It wasn't mean spirited at all, just comic relief. Then the disqualified runner remarked loudly that he jumped because he heard sound from across the track from behind where the line judge was.
The conversation went something like this:

Then the starter turned to his right and muttered to an old coach standing just to my left trying to contain a laugh...

The old coach just smiled and nodded... like he'd seen a lifetime of shenanigans on the track in his career.
It was really comical, everyone was laughing ... but as they say, I guess you had to be there.
The line official, one of my favorite starters, said hello and that he remembered me from previous meets and also remembered that I encouraged him to get back out there as a Masters runner. He said, "No, my wife would kill me."
Anyhow, it was great to run with 'the kids.'
Track meets are fun.
------------------------
On a side note... I was asked again tonight to run in the Millrose Games with the Philly Track Club. I decided to decline but reasserted my interest in the Penn Relays.
(Photo: from my 200m race 1/7) 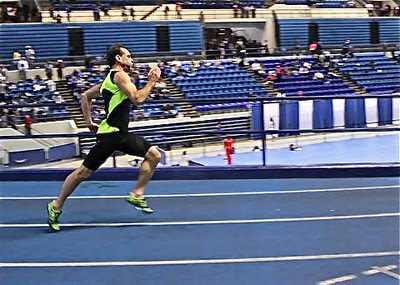