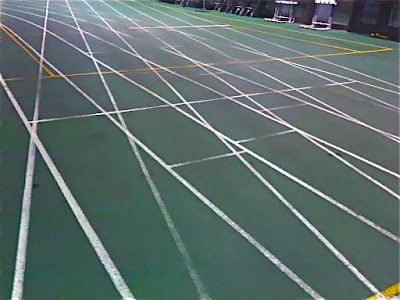 Well, I got confused again about the track markings. I think I ran 410's tonight instead of 400's... at least I hope so. After the workout and now after looking at the photo of a previous post, it looks like I was running 410m sprints tonight (...from beginning of the handoff zone). Good thing ... after looking at the clock.
The plethora of markings, some faded, some bold, some from yards, some from meters, starting lines, handoff zones, etc ... make this a hard track to decipher. I still am not 100% sure where the break point is. I'm going to track practice tomorrow so I hope to clear this up. I still have to get permission from Dean Hayes to enter this weekend's meet - the Blue Raider Invitational.

I tried two 400 (410) 'event runs' tonight. The first I went pretty much full out for the first 130, floated for 130, then back to full effort last 130. I didn't have much for the end. The second, after several minutes recovery, I simply got up to full speed, about 30-40m and began to float, then reinvested for the last 130m. I had much more left. It was a slower time but not that much slower, and a whole lot easier. The first 200m sprint I did was full out for 60m then settle in pace for 100 and push hard the last 40m. It felt pretty good. The second one was just a strider.
Considering I ran about a 59.5 400m at nearly full effort, I have to be really ready and willing to spill my guts if I intend to run under 58 this Sat. That is the difference between an ok time and a great time. Guts and not rigging up. I'd really like to run under 58 this Saturday. The next slowest guy might be 53. This will be my first NCAA Division I track meet, if I am allowed to run. There will be guys running 47-48.
Inventory:
weight: 137.8 (after workout, before dinner). This is great considering I'm coming off a few days of eating bread w/ butter and jam. Goes to show that once a target weight is achieved, a day of gorging or treats can be inconsequential and be rectified with a back-to-normal diet and exercise routine. A day of light eating (or even fasting) after a day of gorging is definitely in my repertoire.
Shoulder hurts and is most painful during starts when the arm goes back. I wish this issue would go away. It clicks and pops when I first move it then it gets better. Also, I felt a tinge of pubalgia in the starts, but nothing bad or like it was before.
I think I'll do one set of resistance tomorrow and light track workouts on Thurs and Fri. Nothing real hard.
Posted by William at 6:45 PM