Warmer today in Sewanee, about 79º at 6pm and no wind.  A nice evening to run fast.  I brought the blocks and my black pair of Puma meet spikes.


I hit my splits pretty well in the event run.  Felt ok, but hard to estimate how I'd feel 80m later.  Now, I would think I should be able to run the last 100m in less than 16, but all that depends on the last 40m, and making sure I don't rig.

12 min later, I ran the second turn again from the 200m start.  I timed it with the stop watch and was surprised to see it was sub 25.   Makes me think I should be able to break 25 this season with a good start.  It felt strong and relaxed... and even more odd, I didn't feel it was 100% effort.

I have to believe that my speed is partly due to my lightness.  Again, 140.7 lbs after workout.   Since I've been racing every weekend, #3 coming up, I've not been in the weight room at all.  Just a few resistance bands and an ab routine, mostly just sprinting.  Specificity. 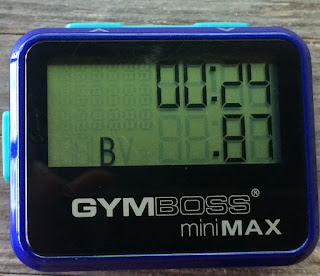 I'll go out tomorrow mid day to do a warmup and a strider, but to race on Sat, I have to get up at 5am which really sucks.