Brought my 'B game'.  Really just tried too hard, went out too fast, rigged hard at the end in both races.

I knew the conditions were good, and this was the best track I might run on til Nationals, so I just misjudged my pace and came up short.  Too fast to sustain.   With the amount of rigging I felt in the 400m (John says I was almost reduced to walking speed by the end)... I'm surprised it was as fast as it was... 56.11 - a time that still would have won Nationals in Jacksonville, faster than any race I ran last yr prior to Nationals.   Leads me to believe I was on a PR pace... until 350m (as many substandard 400s turn out when rigging occurs).    Same deal in the 200m.   I think I often underestimate my speed at the beginning of races, when it feels easy, thinking I should be pushing harder.  Then it bites me in the ass, literally ... in the end.  Those glutes were burnin'.  Running 55.72 last week felt so much easier.   At least I did not finish last in either race (heh - second to last is better than last). 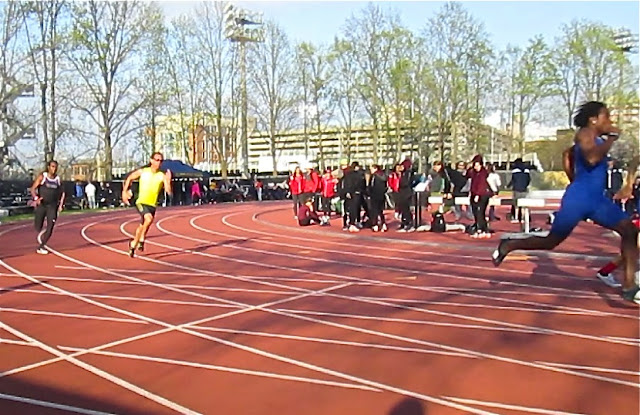 The 400m started out ok, I thought I was being conservative until I passed the split clock in 25 something.   I came off the final turn shoulder to shoulder with another runner and I put the effort in too soon and was toast in the last 30m.   If I had conserved a bit more down the backstretch, it would have been a better result.    The fatigue seemed to grab ahold quickly on the home stretch.  At 100m, I felt as calm as a walk in the park, my mouth wasn't even open to breathe.   Even at 200m, I felt ok.  Should have relaxed more into the homestretch and expended less effort.   Oh well.   Fortunately, I did beat one guy. 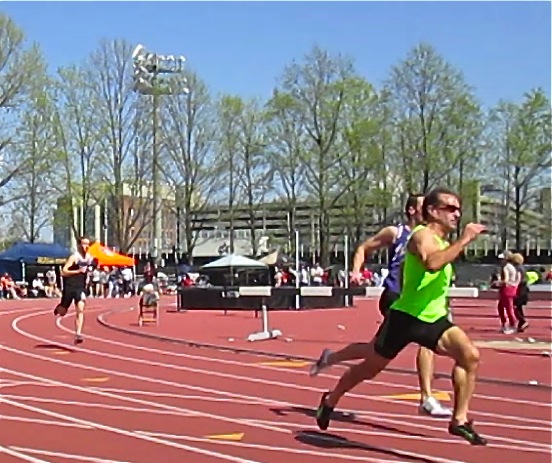 After my races I hung around to mingle and enjoy the meet.   Watched Dave (M45) and John run the 800, talked to a girl from Spain who also ran the 800, talked with an M30 400m hurdler.  Talked with the officials and just enjoyed being a part of it.  That's what it is all about.