Well, it's a start

Disappointed in my performance at my first meet.  I mean, I won the 400m, but I was hoping for a faster time.   Hard to know how I really did with my time being simply called out at the finish line in whole numbers... but I thought I crossed the line before the race clock hit 58.   But the guy with the watch said my times were 58.0 for the 400m and (about) 25.5 for the 200m. 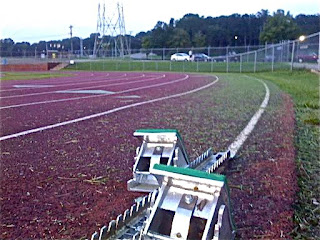 It was a real loose meet in pretty bad conditions.  No bathrooms, wet soggy track with debris on it, about 80º and very humid and steamy.

It was a time trial for me, no competitors, although my heat was full.  No one else ran under 64.  My friend Bill M. was in the lane just to my outside, I made up the stagger on him in the first 60m.   My first 200m split was right around 26.  Maybe too fast for my level of fitness.  Hard to believe I slowed so much as to run 32 in my second 200m.  But, it is what it is.  Just a wake up call that if I am ever to run under 56 again, I really have to be lighter, stronger and in better shape.   I was a bit heavier today, thought I should eat some carbs this morning.  Weighed 143 when I left for the meet.

These times were not exact, but it was a good exercise and workout.   Not as fast as I thought I was, probably good.  Need to do better before my first FAT timed meet in 16 days.   I'm planning of some weight training tonight and back to the track tomorrow.   Not sure what to do, probably 500s.
Posted by William at 7:59 AM