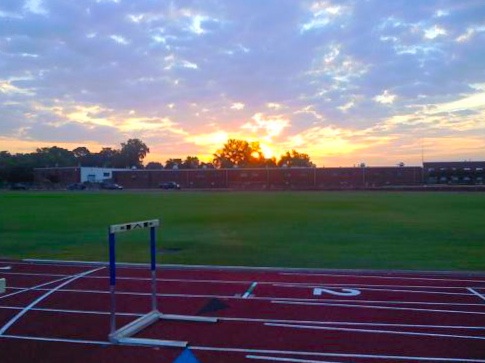 A summer morning on the Dean Hayes track ...low 70's and a nice sunrise at 6:25am.   The track was wet in places.   Since there is a home football game, the parking Nazi's were already out.  I had explain my purpose to the parking attendant.  It's going to be nearly impossible to drive to MTSU later today ... damn football.   Even the freakin' band was out on the field practicing at 6:30am.

I wanted to do quality and quantity today so I ran less reps but faster, and with a short rest. At the end, I did some quality work.

It was tough, especially the last 300 and 200 in the set of 4.  I seem to hurt more aerobically immediately afterward than during.   2500m of sprints was pushing it for my ankle.

Just before I did my last 300 + 200, the soccer girls came out with that prick assist. coach that previously tried to eject me.   I was going to say something to Coach Aston, but I didn't.  We ignored each other ... but the best thing was that the soccer team got a clue that I had every right to be there.

The Diamond League 100m race in Zurich today will feature eight sub-10 sec sprinters:  Bolt, Gatlin, Rodgers, 3 other Jamaicans ... and the return of Walter Dix who was injured in the USA Championships.  The 400m will feature a rematch between LaShawn Merritt and Kirani James.  It's going to be a great meet.
Posted by William at 6:31 AM