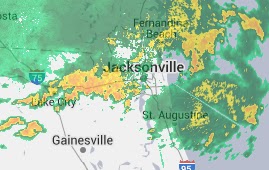 Severe thunderstorms ruled the evening here at the USATF National Masters Championships in Jacksonville, FL.  Tomorrow will be a timed final.   I'm ok with it as long as they seed the finals properly and I get in the fast heat.   If it turns out as expected, I'll probably be running blind to a number of my toughest competitors as they will be on my inside.   Anyway, looks like a good heat with 8 guys 58 and below.

It was fun chatting in the parking lot with some of my fellow masters.   As the storms approached, we chatted until the lightning became too close for comfort and retreated to our cars.

I just knew this meet would be like this.  What happens if it storms again tomorrow at race time?   I wouldn't mind racing at 10pm.  Forecast calls for 80% chance of rain most of the day tomorrow, and this being FL, you know there will be lightning.   I've raced in rain but the USATF guidelines prohibit a race from being staged until 30 min after the last observed lightning or thunder.  Good luck with that.   I knew Jacksonville was a bad idea.

Kudos to my fellow Tennesseans Sonja (W40) and David (M60) who won National Championships in the 800m today.
Posted by William at 7:24 PM