I had really no reason to race in this meet but to just have fun.   I raced the 100m and 200m at the Greater Nashville Sr. Olympics District meet.  I like this meet because they hire a certified USATF official to start, and usually have experienced hand timers.

I hadn't run at all for 3 days and got there a bit late but had just enough time to warmup for the 100m.  My times weren't anything exceptional, about what I've been running in training (add 0.24 for standard FAT conversion).

There wasn't any competition there.   Duane was running in training shoes and just doing it to qualify for the state meet, not running full effort.  (I probably won't do much track this summer, may not run the TN state meet).  The 100m felt good, I got a good start but someone false started and we were called back.  My second start wasn't quite as good.  By the time the 200m came around I felt pretty sluggish, but got through it.  I had a slight knee pain so I scratched the 400m.

Although I am signed up to race at the Chattanooga Sr games in 3 weeks, I feel that this is the end of my season.  I feel a bit despondent that the work I put in after coming back from the plantar injury in March didn't come to fruition.  I lost momentum in June after a ham injury and in July after a hip flexor.  These were relatively minor, keeping me out for just 2 weeks each, but were at a very bad time.  I wish I could go back to June before that first injury.  I worked pretty darn hard this summer and feel in some ways, it didn't pay off.  This was the first year in my masters career I failed to run under 56 in the 400m.  The worst moment was my semi in Malaga.  I should have been in that final. My semi time would have earned me a 6th, and I should have been able to run at least a 56.5.

Time to rest, recover, strengthen, and retool for Poland.  I plan to be regularly in the weight room and lessen the resistance and do higher reps, and hit the track or grass for longer runs once a week.

At the Nashville meet, I think I raced at about 147 lbs or so.  Afterward, I went to a local strip mall, had a bagel with cream cheese at Panera and an ice cream next door at Cold Stone, and a coffee.  I didn't eat much of anything the rest of the day except for some chocolate, fruit and nuts.  Despite this bad eating, I weighed just 145.5 this, the next morning.. the least in a week+.   Amazing how many calories are used in the warmup and execution of just 2 short sprint races.   Maybe it's just verification that 'calories are calories' and if you eat bad, fatty, sweet, carby foods.... as long as you don't eat a lot of them or do it often, it's ok.

Back to the solitude of Sewanee.  Will do some biking and maybe weights today, along with some guitar practice.  Lovely morning here... Jura coffee and a Panera cherry pastry.   Perfect weather.   Just a tinge of color as the leaves are starting to change and the sunset view returns to Champion cove and soon, 'fireplace weather' will be here. 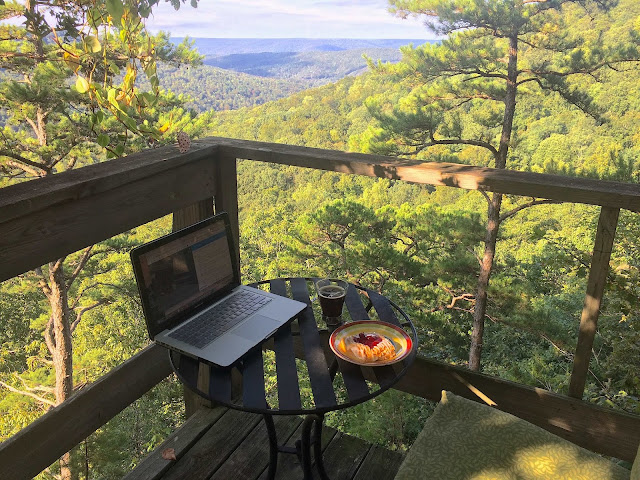