My fourth day of competition was relay day.  I would like to post more about the entire Malaga experience - both as an athlete and a tourist, but I don't want to turn this into a travel blog.  However, in the days to come, I'll post more stuff about Spain, and my entire experience including the tourist things.  After all, I had more time off than I was expecting.

We met out front of the stadium, measured steps, and practiced handoffs for about 20 min.  Rob to Damon, Damon to me, me to Don.  I had 3rd leg, the turn and needed to get the stick to Don, hopefully with a lead.  Don was tired, having run 9 races by now.  The Brits had some fast guys, Neil and Paul who were 200m finalists in Daegu, and John who was a 200m finalist in Malaga ... so they had a solid team.  Australia did as well.  We had lane 4, Aussies in 5 and the Brits in 7.  I felt really good, no signs of ham soreness and a bounce in my stride.

The race started and Rob seemed to hold his own and the exchange with Damon looked ok but the Brits had a slight lead.   Damon came and I was about even with the Brits but ahead of everyone else when I got the stick in a good pass.  I was against Paul (4th in Daegu 200m) and I made up the split  and gave Don about a 1-2m lead.  Our exchange also went real well and I remember the baton slap into his hand and I ran behind him half way down the straight yelling 'Get it Don!! Get it!'.  I was a bit worried as John from the UK started closing the gap at the end but Don held on to win by 0.37 in 47.40.  Good time, not a great time as we were .25 faster in Lyon.  Our splits as posted on the team spreadsheet were:

We were fortunate to win as I had learned later, Damon had injured his ham during the race and had to withdraw from the 4x400m team. 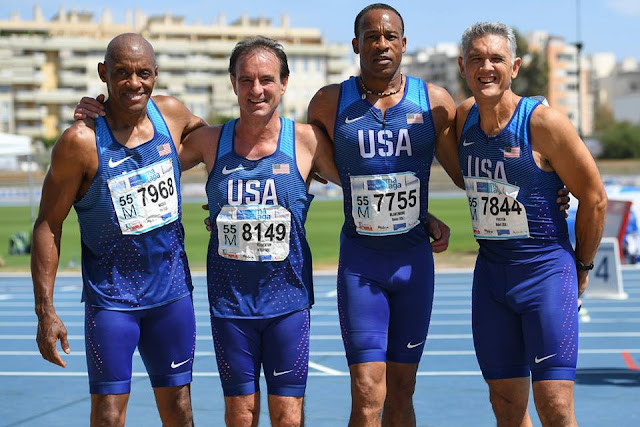 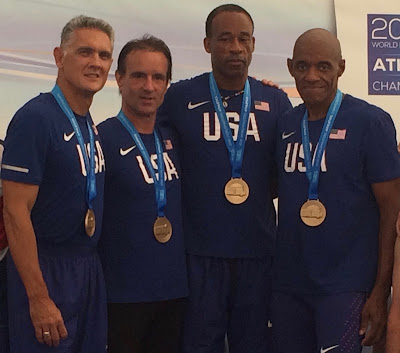 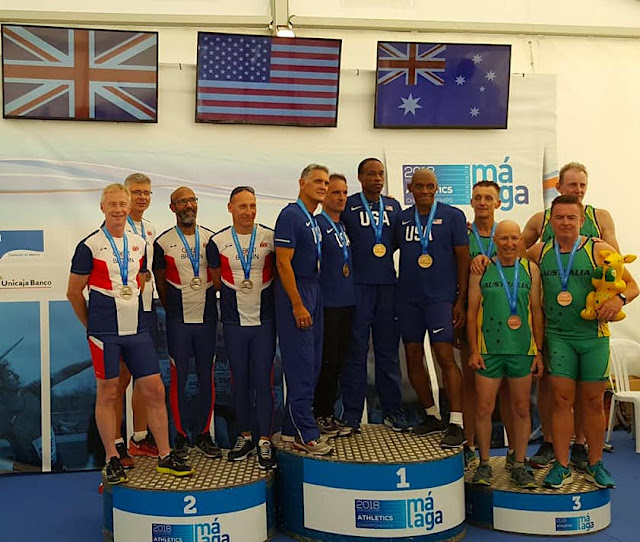 We were not going to beat the UK in this one.  They had 4 of the top 5 finishers in the M55 400m.  So we were dueling with a strong Australian team for Silver.  They had Todd and Darren, tall 400m/400mH guys front loading their team.  Don led off for us, me second, Rob (subbing for Damon) third, and Marcus on anchor.  We were in lane 5 while the Aussies were in lane 3.  I got the baton from Don behind the Aussies and well behind the Brits.  Determined to beat the Aussies to the break, even though Todd had inside lane, I took it out a bit hard and paid for it in the end.  I took at least a few meter lead in front of Todd and expected to hold it, as I wasn't rigging, but to my surprise, the tall Aussie came loping by me in the home stretch and I passed off to Rob about 3m behind.  That sucked, I hate being passed in a relay.  Rob held his own giving the stick to Marcus just behind the Aussies.  Marcus at 6'4" tall was racing an Aussie who was about a foot shorter than he.  Marcus ran a good smart leg and finally passed the Aussie with about 40m to go giving us the Silver.  The Brits won by a ridiculous 9 seconds in 3:42.42, setting a European record - averaging 55.6 per leg more than 2 sec faster than our avg 57.83 per leg. 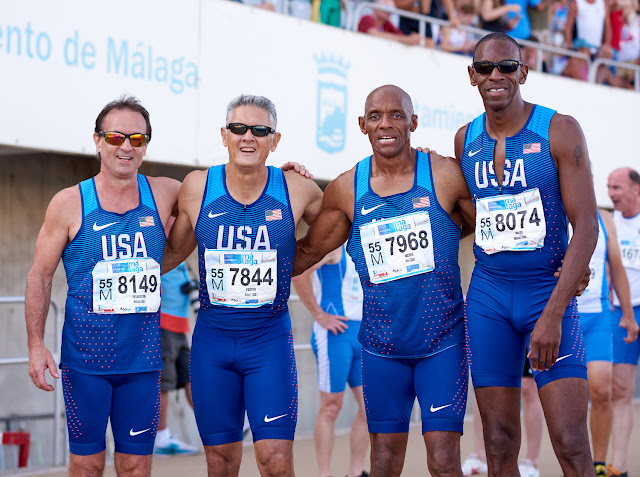 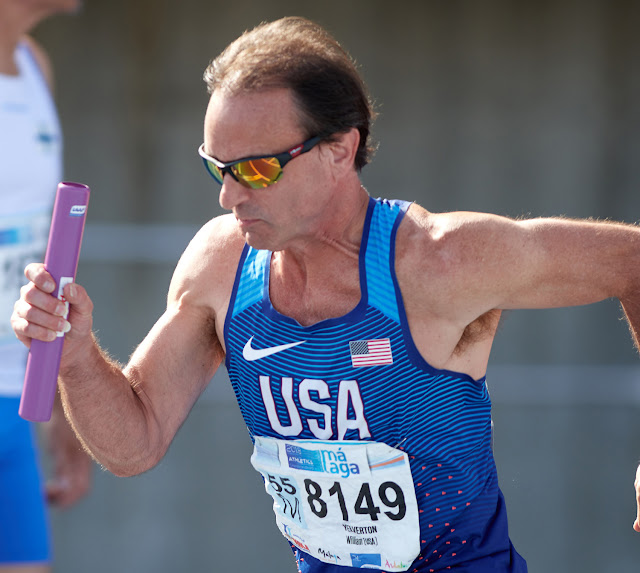 Unfortunately, the USATF Masters committee is overwhelmed by the task of putting about 40 relay teams together, and because the decision has to be made quickly and the criteria is vague, the system often fails.  Filling out paper forms with some scribbled notes is not a good way to do things.  I will propose at some point an online form with clear criteria and links to athlete performances so everyone is privy to the situation and there are no politics involved.  It's a complicated issue, especially when comparing athletes who, for example - don't usually run the 100m, for placement on a 4x100m team relay.

All that said, there was controversy and I had to make my case that I should be on the team because one of the members - like me, who only ran the 200m/400m,  had: 1) ran slower than me in the 200m Malaga prelims,  2) ran significantly slower than me in our last recorded 100m races from '17 (12.25 vs 12.65).   I was told by team captain Phil, decisions are based 90% on performance at this meet.  I had emailed team captain with no response, talked with Rex the masters chair, no response, then finally contacted Robt. who agreed with my case.  He asked me 'why I didn't make my case to the team captains at the Friday night social?'  The fact is, I did.  That is when I talked to Rex.  I didn't know why I had to make my case if they had the data.   It was 11:30pm the night before the race that I found out they made the change and I was in the M55 USA 4x100m.   This unfortunately caused some bad feeling, particularly because, unbeknownst to me, someone close to me contacted the athlete in question and asked him to do the right thing to which he responded negatively and with some falsehoods.  I was very embarrassed and extremely upset that it had come to this.  I didn't need anyone meddling in my issue, didn't matter who was right.  I felt the fallout later.  I hope I can salvage an apparent lost friendship. 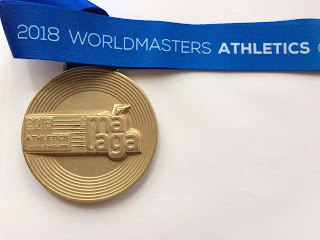