I'm here.  After a pretty much sleepless flight over, which seemed to go by quite fast (compared to trips to Australia and Korea), I picked up my car in Malaga, and drove directly to the main Stadium to pick up my credentials and declare for my events.  Well... not 'directly'... I drove around quite a bit, lost in town, found the stadium after a while.  Despite my fatigue, I stayed to watch the 100m finals and chat with friends.  Knowing I would be racing the next morning, I stopped on the way to my hotel at the University track.  It looked good, a blue Mondo.  Then I got to my hotel about sunset which is late here, about 8:38pm local time.    Hotel was fine, clean, good bathroom, quiet... good choice. 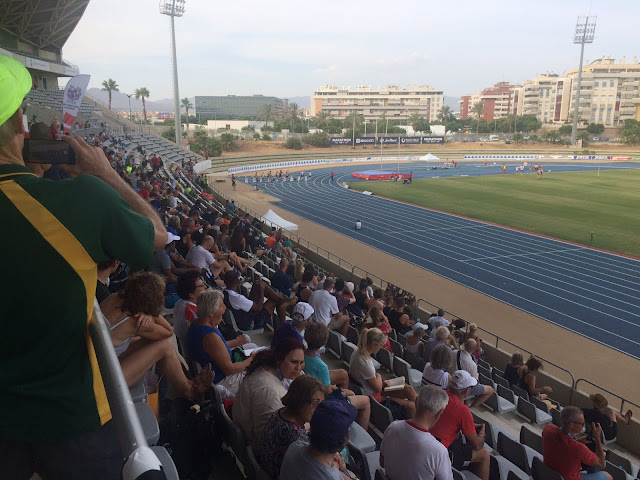 200m prelims
Drawing lane 7, I had only one fast guy in my heat, a tall impressive looking Estonian who had run 25 flat last yr but not under 26 this yr.  He had lane 6.  Outside of me was Bob from the UK who is a mid 26 sec 200 guy.  Despite the jet lag, I felt fine, although a tad sluggish.  I was in the 7th of 10 heats.  I got a decent start after a long hold, went out very hard and immediately passed Bob in lane 8.  There was shifting crosswind, stiff... giving us a tail wind at the start but it turned to a headwind that hit us hard at the top of the straight.  (The wind reading was a -2.5 headwind).  I was leading the heat with about 50m to go and started fading due to my aggressive start and to my surprise, was passed by the Estonian.  We finished well ahead of the others and he ran 25.30, I ran 25.72...  quite a poor time even considering the headwind.  Not a good executed race.  I do believe it was the Estonian's maximum effort.  Since I've run 25.30 twice this season after a 400m, I should be able to at least get to that by next race.  It will take at least that to make the finals.  I was only 10th fastest in the prelims, and I have a tough heat with the same Estonian, the 100m World Champion from Italy (25.10 in the prelims), and a Japanese who also ran faster.  Unfortunately, I drew lane 8 which means I really have to run my race and execute well.  These much taller guys will be coming at the end so I need to not burn the turn and save some for the last 50m.  If I don't finish at least 3rd in the semi, I probably won't make the final.

After the race, lunch at the stadium with Dale, Roxanne, Emma, and others.  Finally met Pat Logan of UK and had a nice long chat with him and John Wright.  (Both ran a tad slower than I did in the semis).  Then I went to the third track Carranque where events were going on under the lights til 9:30pm.  Being right in the middle of the city, I drove around almost 45 min before I found it.  I needed to see where it is and the parking situation since I'll be running one race here, the 400m prelims on Tues. 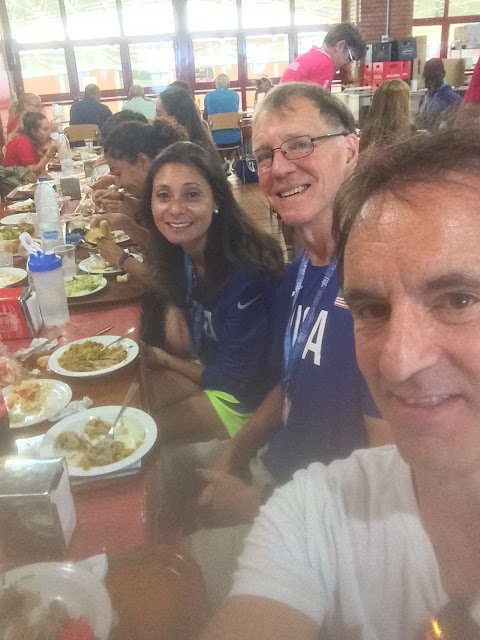 We went out for dinner later, I had a shrimp omelet, chicken and salad w/ tuna.  Food is fairly cheap here, and having coffee here reaffirms the fact that the USA has the worst coffee in the world.  Coffee here is wonderful, even in a stadium cafe.

Today, Saturday, a badly needed rest day, is raining like hell.  But I need to get out and do some sightseeing and shopping.  This is an enormously picturesque place surrounded by the Mediterranean and the Sierra Nevada and the Sierra de las Nieves Mountains.   People here seem courteous, drivers not too crazy ... generally an attractive breed of mostly fit healthy looking people.   I was driving in the city and got into the wrong lane by mistake, and it was a taxi that stopped traffic and let me in to make my turn.  How often would that happen in the US?  Never.

I hope I can make it through the rounds and at least get to the finals of the 400m, if I don't make it in the 200m.  I wonder sometimes if I can still run fast.  Fortunately, I have no injuries, just a bit of fatigue. 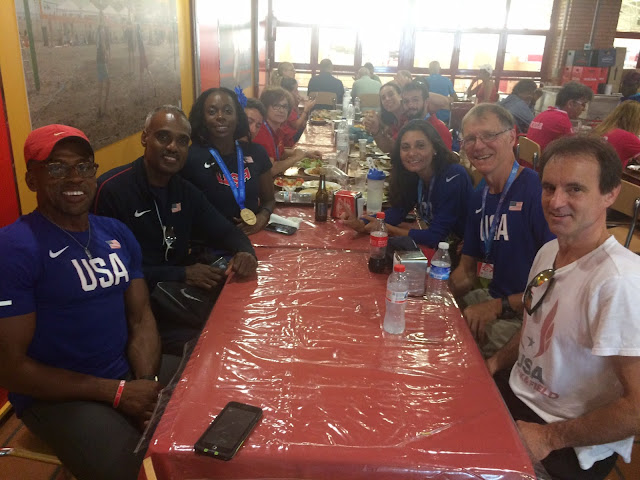