Day two of racing was a bust for me.  Under-performed again, still only a 25.70 from lane eight in the semis, finishing fourth.  Did much like I did in the first round, except stumbled slightly at the start.  I was even with the top 2 coming off the curve but rigged in the last 15m and was passed by the Japanese who took 3rd.  I led him through the whole race until the last 20m.  I lost so much time at the end he beat me by 0.24 sec, or about 2m.  Don't know what is the matter with me.  Have felt generally weak since I got here and have lost confidence a bit.  This is the first event at a World Championship that I've been eliminated from the finals.

This photo was of my semi, about 40m before the end.  I got passed by the guy to my left from Japan. 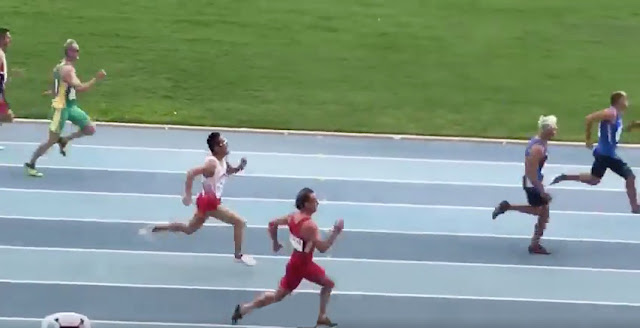 Was planning on doing a big drive today and take some friends into the mountains, but no one wants to go and many are sick with colds.