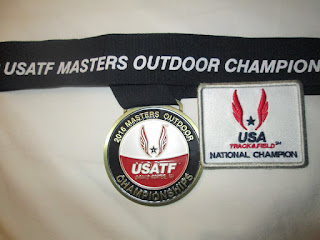 Due to some bogus seed times, I ended up in lane 6 with all my competition to my inside.  So, I was running blind.  I felt really ready, actually better than yesterday.   The conditions were better today, only mid 70ºs, but a headwind down the back stretch.   Even with good execution it would have been hard to run a fast time today in the wind.  But, I did not execute real well.   Went out a tad fast and rigged in the end, but was able to pull out a win.  Didn't really know what shape Corey would be in, he seeded himself at 54.5... which was quite 'optimistic'.     I was essentially alone the whole race.  After I made up the stagger on the outside lanes, I never saw anyone.

I walked to the start with my training shoes on and didn't have much time to get my spikes on.  Was a bit late in getting out there.   At the start, I flinched and got out OK despite my blocks slipping about 2".   To my surprise, I was called for a false start because of my flinch, and they never even saw my blocks slip.    I thought they called the false start for my blocks slipping, but no.  The second time, I had an official stand on my blocks and I got out safely, not a super quick start but I took it out pretty hard.
After about 150m, I was running totally blind.  I kept hearing Pete announcing "Yelverton, Moody" ... so I knew Corey was there.  Going out that fast was a risk, I knew it.  I think my splits were a half second hot, 25.5 / 39.5.   That cost me in the end.   I felt strong coming into the final home stretch with 80m to go, it was fairly close at that point, I had the lead by just a few meters.


Then, I powered ahead... at one point I think by about 7m.   Coming down the stretch, I looked to my left a few times expecting to see Corey or Tyrone...  but no.

With several meters to go, Pete announced, "Bill Yelverton will win it!"  It was a relief since I was rigging up, and wasn't sure where Corey and Jim were.  But despite falling apart, I still won by about 5 meters.

I felt lucky to have pulled it off since I didn't feel real good about the way I ran it.   If I had not took it out so hard, I should have run a half second faster ... at least.  But, a win is a win. 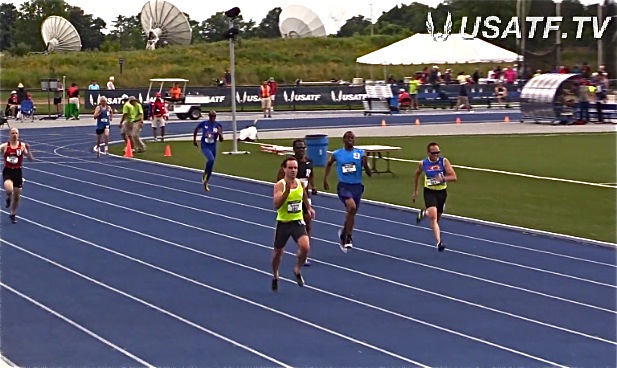 It was a great field.  In our full heat of 9, we had 2 former world champions - Jim and Corey, and Tyrone who won Nationals in '12 (all to my left above).

Looks like '16 is turning out pretty well.  2 more National Championships.