The outdoor season begins, and another PR on a hot day at the University of South Florida, Tampa.

This meet was run on a nice Mondo track in 85º heat.  I wasn't use to the heat so I felt a little drained at the end of the day.   The meet featured a wide range of competitors, everyone from Olympian Walter Dix and Calvin Smith, to slow guys like me.  Just to show how diverse the field was, I beat 10 of 67 200m competitors overall, and that's a lot for a Div I meet.

100m
I was happy with the 200m, but the 100m was a disappointment.  Although just .05 off my PR from '12, I felt I didn't run a good race.  I really wanted to go sub 12 and I 'forgot' to stay loose and lost time in the last 20m or so after getting a decent start.  I swear I was winning the race at 30m, then as people started going by me, I got tense and tightened up near the end, losing time and finishing last in my heat.   I definitely learned from this experience and hopefully I'll be able to crack the 12 mark later in the season.

200m
I was in the second slowest heat of the day with guys from small colleges (like Swarthmore  and Warner), so I fit right in.   Getting a good lane (4), I had someone just a tad faster than me to my outside in 5 and the guy in lane three was very close to me during the whole race sounding like he was dying, gasping and grunting the whole way.   I just edged him out in the end, he certainly pushed me.  I managed to stay loose and run a decent race, actually finishing strong and beating 4 of 7 guys in my heat.  It was a good race, all 7 of us were within a second or so.  I was happy with the time, being the first 200m outdoor race of the season, .21 faster than my PR from January.  Surprising since my training on the track has not been particularly plentiful or intense.

Now again, it looks like it will not be until Wednesday before I can get on the track to train again, but I should be back to resistance work by Tues night. 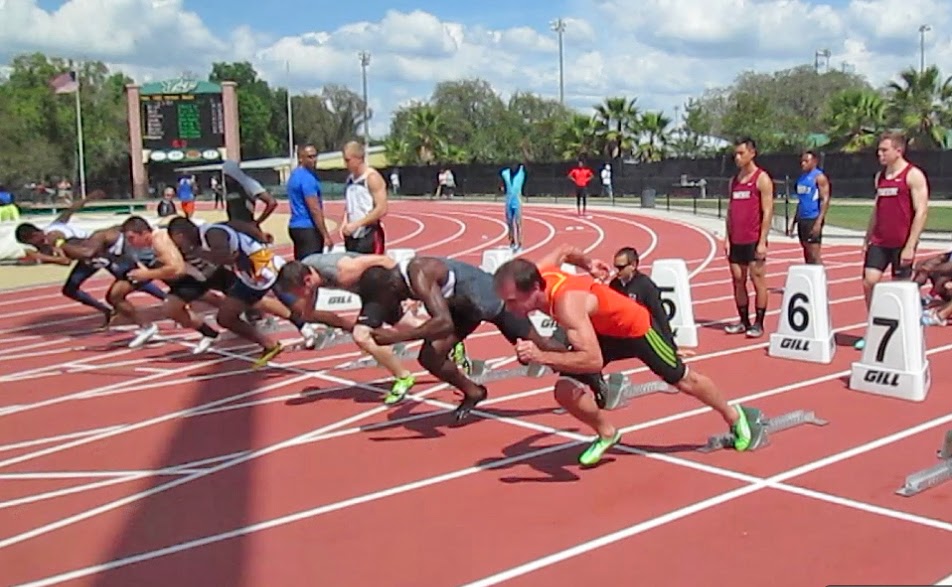