This is really disappointing.  Especially for me,  about to move into a new age group and having had a lot of indoor track success.

There will not be a Masters Indoor Nationals on a good banked track until 2021 at the Armory.

However, most disappointingly, the 2021 WMACi World Indoor Championships in Edmonton will be run on a flat track.  Banked tracks have been standard for Indoor Championship events since my entry into the sport in 2012 when I won my first National Indoor at IU.  I seriously doubt any World Records for the 200/400/and 4x200 races were achieved on a flat track.  It's simply a much slower surface and is conducive to injury, especially if you have an inside lane in a 200m.  I reinjured my foot at the 2018 Nationals in DC on a flat track in lane 2.  Not that I blame the facility, but it's a fact that flat tracks are 1) not standard or desired for indoor championships, and 2) are harder on the body for a sprinter.  I've sprinted plenty on flat 200m and even once on a 160m indoor track without being injured, I just happened to be battling plantar fasciitis at the time.

What is most disturbing is that the Edmonton bid document listed a new facility as their #1 venue.

Page 31 of the document, describes the facility as having a "200m hydraulic (IAAF certified Beynon surface) banked track.  (see the image at the end of this post).

I wrote a few USATF and WMA officials.  I heard back from Rex, USATF Masters Chair.  As a former sprinter, he gave me a very thoughtful reply:

Bill,
I have recently learned the same thing that Edmondton will not be building a new hydraulically banked indoor track.  We can't fault Edmondton for bidding with that track because it was promised to them.  Over the years we have learned to not trust "promised" facilities, but I think in this case, Edmondton was the only bidder for this Championship so they got it.  But now that it is not happening, what should be done?  I'm afraid that we do not have much power over that.  It is WMA's business, not ours in the US.  We have to remember that anyone in the world that does not want to run on flat tracks is perfectly free to not do so.  They simply vote with their feet. As you recall, many, many Europeans did not go to Kamloops for the WMA World Indoor Championships for the reason of the flat track.  That had the side effect of a lot of Americans winning world championship medals that they otherwise would not have. I enjoyed a good competition much more than merely winning because of who was there, or not there but that is a personal preference.  Also personally, towards the end of my running career, I stopped sprinting on small indoor ovals as it was too hard on my body.   Flat tracks are certainly not the ideal, but there are hundreds of things that are not ideal at any given track meet and each of us has to decide to accept those deficiencies, or avoid them.
Spokane is bidding for the 2023 WMA Indoor World Championships with a "promised" hydraulic track.  The difference is that they have already broken ground and the construction is underway and is bidding for the USATF Masters Indoor Championships for 2022 as one of several "warmup" meets .  I must say that it will be difficult for Spokane to win the WMA bid if a European site also decides to bid because that will mean three WMA Championships in a row in North America (Toronto, Edmondton, Spokane).  It is my opinion that WMA doesn"t worry about three in a row in Europe, but they do North America.
I guess the bottom line is that each individual needs to make their own decision.  Every meet has its challenges, and it is up to us whether or not to accept those challenges.
Rex Harvey
Chair:  USATF MTF


I am disappointed that Masters indoor has been relegated to substandard facilities, but it is the same for everyone, (except in Masters World Rankings where Europeans almost always use banked indoor tracks in their Championships). We as competitors are compelled to embrace a 'culture of gratitude' for the opportunity to compete, as the administration and organizers of Masters Track are generally unpaid volunteers who donate their time.  Many National and WMA championships bids have very few if not just one willing bidder.  We are compelled to 'take what we can get.'  Hopefully things will improve.  I guess I got accustomed to running on great indoor tracks at great venues at 4 USATF Indoor Championships - at I.U., Boston's Reggie Lewis, a 2 in Albuquerque; and one in Daegu.  2016 Indoor was the only season I finished with a #1 world rank.  I finished 2017 indoor with #2 world rank.  I love running indoor, but a good facility makes a huge difference.

The track that was never built for Edmonton 2021: 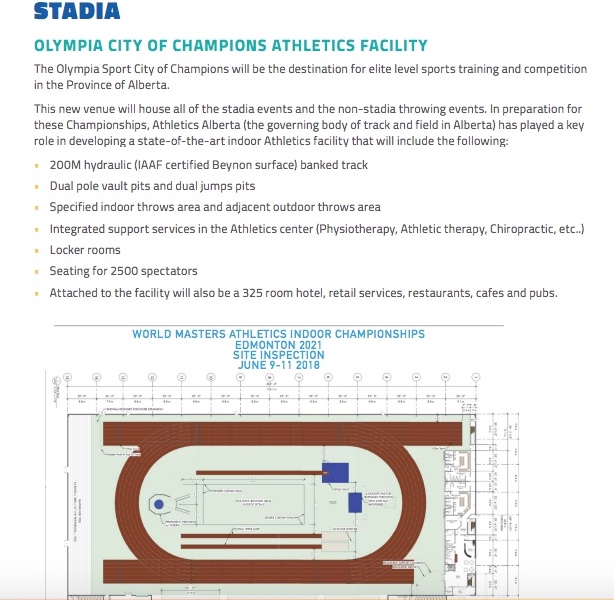