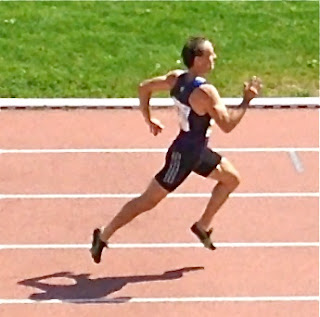 Fastest qualifier in the 400m.  See the list here.

Feeling good, confident that I'm ready.   My execution was good in the prelims.  The track at Rhone Stadium is faster than Balmont Stadium, where we ran the 200s.  It was the 4th fastest 400m I've run, and by far the easiest race I've run in the 55's.  I was not totally spent afterward, no rigging at all.  I think I could've even run faster.  My form down the stretch was quite good - the top photo was taken in the last 50m.

With a day off (Thurs) between the prelims and semis, I wanted to run hard to test my race plan, and to simply get a good training run in for the next two rounds.  The next round will have to be a maximum effort if I want to win it.

I was in the very first of 10 heats, so I'm sure some of my competitors got a good look at me ... and a message.  I think many observers would see this as a wasted effort, not a smart race, winning a prelim by 40m.  But I really think I needed to do this.  I felt no stress or soreness afterward.  It was good for me.  Alan T. said to my dad that he thought I should have 'shut it down' coming down the stretch.  I just stayed relaxed and did my thing.

I love this track ... there are big electronic race clock displays at 200m and 300m.   I saw my 200m split and was surprised to see how fast I was moving.  It occurred to me I that I might try for a PR, but that would be too much, so I just stayed relaxed and floated in.  No one else except Gerhard ran this strong in the prelims, and even he was .36 behind me.

They haven't published the start list for tomorrow's semis, but if they seed it as expected, I should have Rob, the defending World Champ from 2013 in my heat, probably me in lane 4, him in 5.  He doesn't concern me as much as 2 others.   He, Gerhard, but more likely Benoit from France and Ferreira from Brazil should be my main competition, assuming I make the finals.

Here are photos of my heat in the M55 400m prelims.  You can see my competitors at the edges of the photos.  (In the second photo, there is a competitor in lane 5 not yet in the photo). 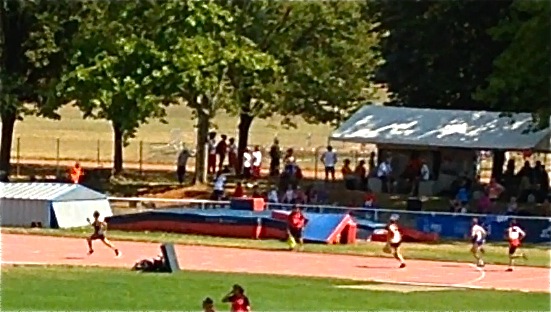 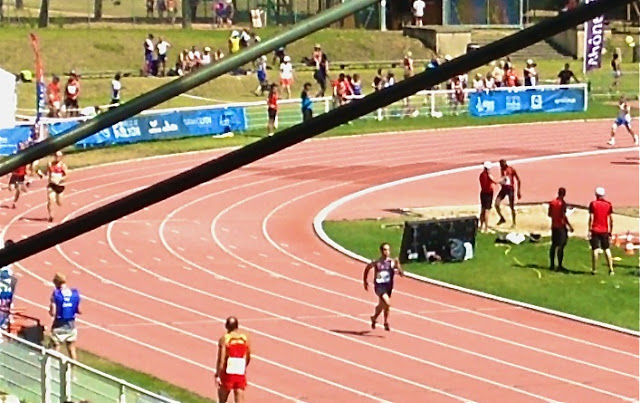 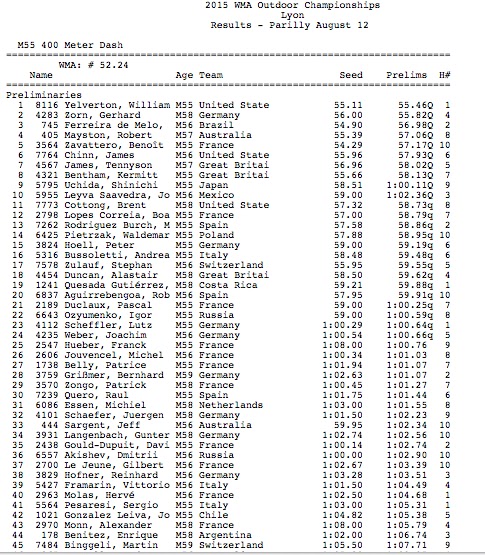