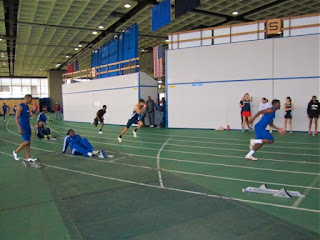 The best thing is that I have no strains or even a hint of an injury. We'll see how I feel tomorrow.

I entrusted my camera to bystanders to take photos of my starts.  Both failed miserably.   I did get a photo of my heat in the 200m, but not with me in it.   I had lane 6 and had already left the blocks.

My backup pair of Puma Bolts performed perfectly.   I didn't lose any spikes or crowns like I did Thursday doing starts.

Next week, I'm going to take some time off from the track and do some sorely needed resistance and 'pre-hab'... I want to run the 55m in Feb and don't want any more hamstring issues.

As expected, I finished last in both events, but not embarrassingly far behind.   I was happy to participate, it was exhilarating.   I left with a smile and no injuries, good to see my 'track family' again.
Posted by William at 12:36 PM