After running two fairly weak races in the prelims and semis, I got my confidence back a bit with a decent race in the 200m Finals.  Finished 6th in 25.04.  Sure, I would have liked to run faster, but after a disastrous 25.47 in the semis - resulting in lane 7 for the final, I'll take it.  It's actually 0.04 faster than my Bronze medal race in France last year, and one of my faster non-wind aided times this year.   It was a fast group, 5 under 25, (compared with 2 in France last yr).  3 Aussies, 2 USA, 2 Brits, a German and a Japanese.   It would have taken a 24.6 to medal, not out of the question for me but, not today.  Don McGee won in 24.44, his second World Championship.  It was fun, the Aussies took Silver and Bronze - 24.60 and 24.61.  They were a riot.  The officials were reading some stuff telling us all to turn off electronic devices, Rudy chimed in 'alright guys, turn off your pacemakers.' 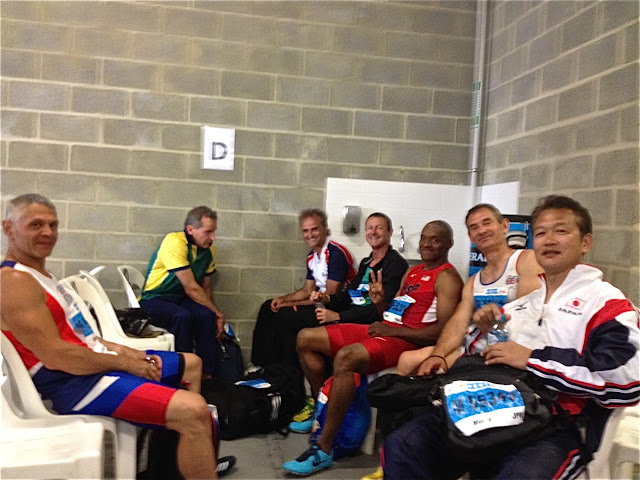 I witnessed some awesome performances today.  Steve Peters, M63 ran a hundredth off the M60 WR in an astonishing 24.11.   He is quite an individual.  An Olympic track coach, psychiatrist, and a dominant masters sprinter.  He was watching our race finish and said he 'couldn't believe it' ... 'shoulders and knees and heads bobbing all over the place...' a study in bad running form.  Steve is a high knee lift runner, as opposed to me - a low knee lift / high turnover runner.   He said that's why I run so well indoors.  Gerhard new to M60, who I narrowly beat in Lyon, also ran his fastest 200m in years, 24.63.

Bill Collins won his second Gold today in the M65.

Tomorrow is the 400m prelims, followed by a day off.  After no shows and not including scratches, there are 44 competitors, and there will likely be more scratches.  There are 5 semifinal heats and I drew lane one for my prelim.  It looks like my biggest competition will come from the Australian champion who has run 54+, Corey - who took second at nationals, and both the Gold and Silver Medalists from the 400m hurdles.  The big news is that the Brazilian who won Silver in Lyon is a no-show.  I'm feeling OK, except for a sore groin.  I think I've gotten out of the funk that I was in and I'm ready to run a 400m tomorrow.  I just wish it weren't from lane one ... with a sore foot and a sore groin.  There likely isn't anyone who will run under 58 in my heat, but you never know.  I'll try and run it hard, because with a day off afterward, it would be good for me.
Posted by William at 6:41 AM