Won my semifinal heat in 56.24.  Advanced to the World Championship Final on Saturday. Second fastest qualifier.

It's hard to recap the race because I have not yet seen a video.   Unfortunately, I am unable to really analyze my race and plan strategy as well as I could with the video of my race, and the video of the fastest qualifier in the first heat.

I had lane 4 with my toughest competitor, an Aussie in lane 3.   He has run faster than me this year so I expected to see him at some point during the race.  Outside of me was the other Aussie, the 400m hurdles World Champion.  I was surprised to see him start without blocks.  He started quite slow and I made up the stagger on him within the first turn.   I floated down the back stretch at a nominal pace, not really pushing it to the edge.  Still, no sign of the Aussie as I entered the final turn, I think I was leading at this point.  Just as I was nearing the end of the turn, the Aussie in lane 3 pulled up along side.  We ran side by side for a brief time before I pulled away.  Glancing up at the big screen, I saw that my lead was significant, but I still ran it fairly hard to the end.    I won by almost a second.  I really don't know if he just let me go, or if he didn't have it.  We'll find out tomorrow because I'll be tracking him, as he'll be on my outside.  It seems that if I beat him tomorrow, I should be in the medals.

FINAL
I'm in lane five with both the next fastest qualifiers inside me, Corey in three and the top seeded Brit in 4.  It's not where I would have liked to be, running blind.  This situation, like all 400m races is like that game of 'lag' in billiards.  Closest to the wall wins.  Hit the wall, lose everything.   So far, my races have been well executed on the conservative side... for the first 200m.  I think my 200m was close to what it was yesterday, 26 low.. which is ok considering a headwind.  Anything faster than 26, I'm playing with possible failure in the form of rigging up in the end.  Tomorrow a 15mph headwind is forecast and hot temperatures.  I need to get that 200m in at around 26 with as little effort as possible.  My competition runs closer to even splits than I, and I need a lead coming into the stretch because he'll likely finish faster than me, he's a tall long-strider.   He beat Corey down the stretch today, mostly in the final 50m, beating him by 0.7.   Corey was pushed, they both were.  I think that could be their maximum effort.  Corey ran about the same time at Nationals as he did today.  I really think that it's possible that anything under 56 could win this and low 56 might even medal.

I need to take it out... good start, stay relaxed, don't panic or tense up if I get passed.  Tomorrow is the day.  I need to bring it.  I feel good.  Whatever happens, happens.

Here's a pro photo of my win today by USATF photographer, Rob D'Avellar. 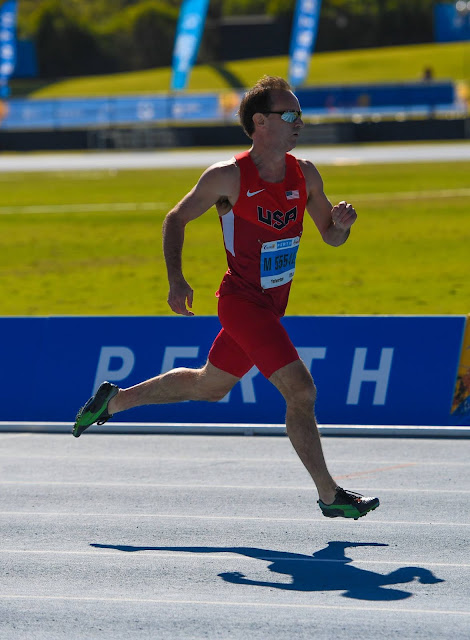 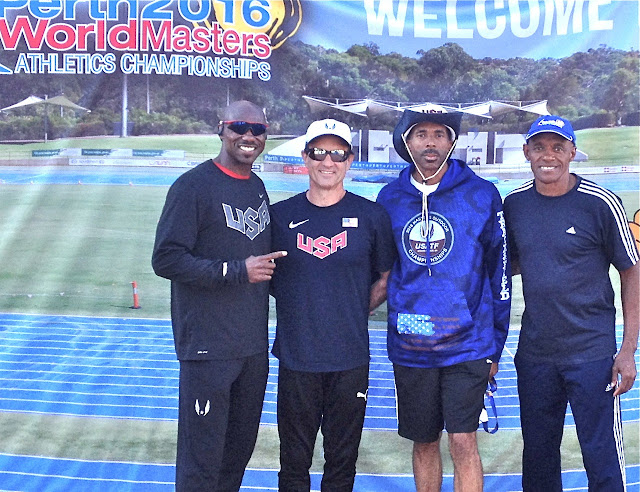