Relays and inspiring performers in Perth

Souvenir medals from the relays

4 x100m M50
It was nice to win Gold in the 4x100m in M50.  We were the only USA Men's team to win Gold in the 4x100m.    I bandaged my shoulder and forehead and put on the USA team kit, and went out to do battle one last time for the season.  I was really stiff, and we had stiff competition from the Germans.  They had three M50 100m Finalists on their team including the World Champion and Bronze Medalist. With us in lane 4 and them in 2, they front loaded their team, putting their fastest guys on 1st (11.55) and 2nd (11.34) legs.  They put their slowest guy on anchor.  I ran third leg.  Don, the M55 100m Champion led off and held his own.  Robert, racing the German 100m World Champion on second leg, handed off to me about even with the Germans.   Not wanting to screw it up and knowing Robert was running into a stiff headwind, I played it a bit safe and took off not as fast as I could have.  Our exchanged suffered a bit as he ran up on me, but it was a solid exchange.   I heard him yelling "go baby go" as I took the stick.  The German on 3rd leg, running in lane 2 had run 11.87 in 100m final.  The Germans had a faster exchange to third leg than ours, and with him having the inside lane, he pulled up even with me on the turn and handed off with a few meter lead to anchor.  Being the slowest guy on the team, I just wanted to get the stick to Clinton and he got it about 3m behind the German anchor when he hit the straight, it was a good exchange.  The German anchor, Andreas, was an M55 guy who didn't make the finals in any event, and when Clinton hit his stride, he went by the German so fast it was ridiculous.  He won by 5m.

To my surprise, we ran a smokin' time of 45.15, an avg split of 11.29 ...   it was just 0.68 off the World Record.  About 2 full seconds faster than both the the M50 and M55 teams in Lyon, and just 0.18 slower than a very strong USA M45 team that won Silver.  Clinton was especially happy.  I really think he was relieved actually that I got him the stick in competitive fashion.  With a history of USA failures in the 4x100m in international competition, it was nice to get it done with just a minimum of rehearsal.  We beat teams from Chile, Germany, Australia, Italy, France, Great Britain, and Japan.

Rob took this photo afterward.   I still haven't seen any photos of our medal ceremony.  Nice to stand and hear my own anthem for once. 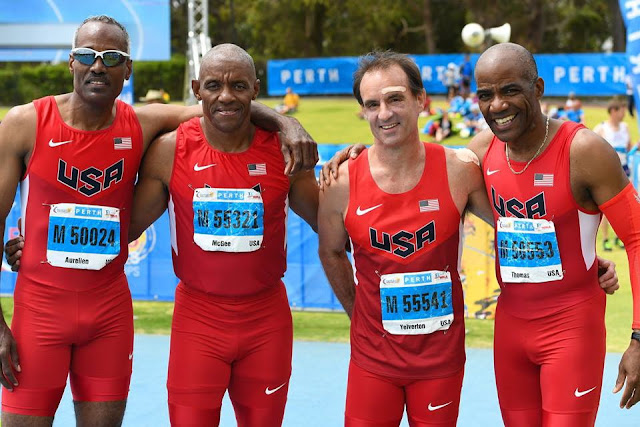 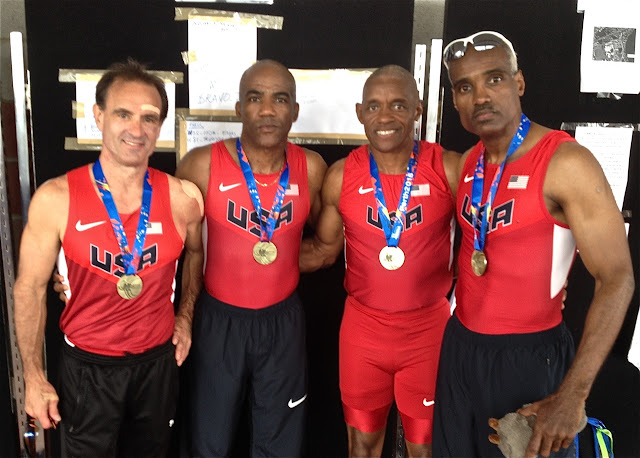 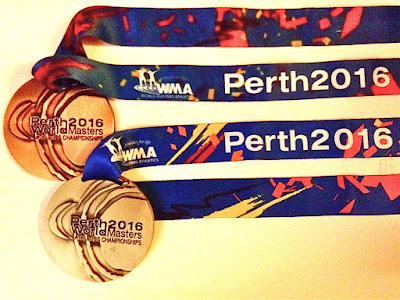