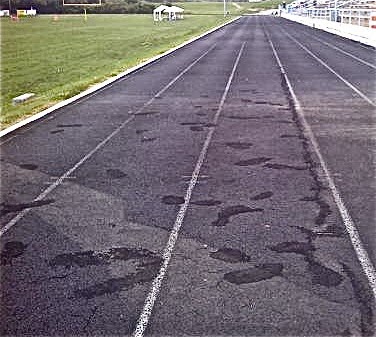 Same situation as last week, poor track, headwind, cool temperatures.   Not quite as bad a track as last week in KY, and not quite as windy.  I did a little better, but still substandard.

The worst thing about this meet was the starter.  What a fiasco.   He had absolutely no idea what he was doing.  This was apparent when I heard him starting guys with the commands: "get ready, get set" then almost no time after 'set,' the gun.   One of the other sprinters, a track official himself, tried to coach our starter a bit.  My heat of the 100m was a comedy of errors.  In our heat he seemed to be waiting for the runners to get into the blocks before giving the command 'on your marks'.   So, we stood there waiting for a while then I said 'well let's go.'  He then gave us his 'blessing from the lord' and said 'on your marks'.   I did my usual back into the blocks and before I even put my hands down he yells 'set.'  I just stood up and said, "dude, you have to wait for me to put my hands down!"   He said, "well, everyone else was ready."  Unbelievable.   Then, we tried it again and he held us soooo long after 'set' that someone just fell out of the blocks.  Apparently, he forgot to take the safety off the gun.  Ok, third try.  He did ok on the commands, but I was still moving when the gun went off less than a second after 'set'.  I was certainly not 'set.'   Oh well, can't be too upset with a volunteer.   The last time they did this, TN Tech's track coach ran the meet.   It was better.

The problem with this meet is that they stop all running events when doing field events.  I got there at 9:15am thinking I might be late.  I didn't run the 100m until 3 hrs later.   Then I had to wait another 90 min to run the 200m.   Uncharacteristically, the 400m was scheduled as the final event.  I was too sore to run it and didn't feel like waiting hours, so I split.   I won my races by 15m and 20m+.   Small turnout.

It was a beautiful drive from Crossville, TN down the Sequatchie Valley and up to Sewanee.

Glad I ran the meet.  I'm going back to foundation stuff and weights and in my last meet, I'll just run the 400m in 2 weeks in Nashville.

The future
This was my first meet in the new M55 age group (TN Sr Olympic Rules), although I don't turn 55 til next season.  It definitely is apparent that if I am to maintain my peak sub 56 400m speed, I'm going to have to be really serious.  It keeps getting harder to stay fast.   If I can maintain, I may be one of the fastest guys moving up.   Only 2 guys in the world this year in M55 ran a faster 400m than my SB.  So, I'd really like to maintain.