Feeling good, no muscular issues or strains after today's brief workout.   I did 3 long sprints tonight at 85-90% in training shoes.  It was warm and muggy, about 82º at 8:30 pm at the Dean Hayes track.

My former student Brad turned out to train with me.

Not exactly race weight, about 144 after workout, but I think in ok shape.  Been doing some hard workouts but just not so often.

Equipment
As a gift from my dad, I bought a 'pro issue' speed suit.  It wasn't exactly the sleeveless one I wanted, but it fits.... but surprisingly tight on the upper body.   I tried it on my last 300m tonight... it feels good while running, but suffocating afterward because of it's snugness.  It's like a body condom.  It's a '14 Adidas Adizero Powerweb.  Nike and Adidas make pro issue speed suits not sold to the public.   They occasionally come up on ebay, usually sold in Europe, and rarely found in size S.   So, I jumped on this one.  Looks just like this one worn by Jamaica's Kemar Bailey Cole, who won the 100m in last weeks Diamond League race in Zurich: 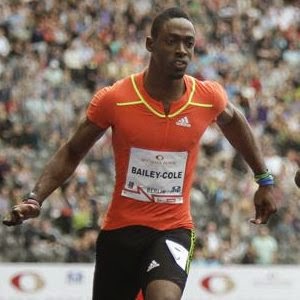