Today I'm going to get my knee checked out.  It's not been bad, but just want to get an image to see what is going on with it.  Maybe there is a loose piece of meniscus or something.   I doubt I would submit to any surgical remedies, and I doubt there is any therapy I could do for it, but interested to see how a sports medicine orthopedist would evaluate it.  It'll probably cost me $400 out of pocket, so I wonder why I'm doing it, but maybe I could adapt future training to help minimize wear.

The Olympics were great.   I enjoyed every bit of it, sometimes even watching the track events 3 times.  Once live on line, replay in primetime with Tom Hammond and Ato Bolden, and the replay of the replay after midnight.  The most remarkable performnces were the 4x100 WRs by the US women and Jamaican men, the second fastest 100m in history by Bolt (9.63), and the 4th fastest 200m in history by Bolt (19.32) which equaled Michael Johnson's previous WR.  The Jamaicans ran average splits of an incredible 9.21 on each leg of their 4x100.  The US team was not far behind with avg splits of 9.26.   I'm generally not fond of sports commentators but Tom Hammond was superb and put an epic spin on the coverage.

The track season is not over.   There are four major Diamond League track events left this season.   Just three days away, there is a meet in Stockholm, then every weekend afterward for 3 weeks.  Many Olympians are scheduled to run this weekend, and Bolt and Blake are expected to race in Lausanne, Switzerland on Aug 23.  With 2 consecutive meets in Switzerland just a week apart, I think many of the elite athletes may run in both.  The last meet is in Brussels on Sept 9.

Sprint finishes, dignified losers?
Note the finish of the Olympic 100m final.  Only .01 separate Gatlin - who got a medal, and Gay who finished 4th.   If Gay had put his shoulders down and dove for the finish, he likely would have nipped Gatlin at the line.  In a slight lean for the finish, usually the chest breaks the finish line.  If one would dive for the line with the upper body close to parallel to the track, the tops of the shoulders would cross the line first.

With a lifetime of work and all the blood and sweat it has taken athletes to make an Olympic 100m Final, I don't know why we don't see more people diving for the finish in such very close races where an Olympic medal is at stake?  Even if Gay were leaning like Blake (in second), he might have nipped Gatlin.   Is it seen as too desperate and undignified or unsportsman-like to dive for the finish line?

I would.  I have.  In the 400m National Final, I beat the Bronze Medalist by just 0.14 seconds, I leaned very far, far enough to stumble and go down at the finish.  I think one can pick up as much as .05 sec or more from such a maneuver.  I did it because I just wanted to be sure I beat the guy coming up on me.  I still think I would have beat him if I didn't make that lunge, it would have been very close.  Nothing worse than getting caught at the line like I did in last years 200m Final.  My friend Dan who watched the finish, said it was a good thing I leaned so hard.  I asked a former many time National Champion sprinter about this and his reply was, "You take the medal, I'll keep my skin."   Skin heals quickly, much quicker than a lifetime of regret ... especially if it is one's last chance at an Olympic medal, probably Tyson Gay's situation.  I say, dive for the line in those championship races. 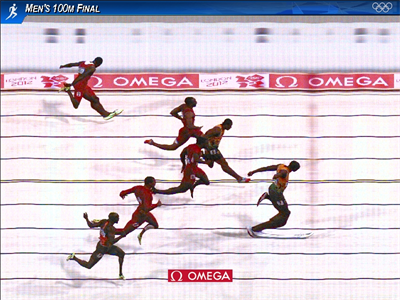 Below is my undignified dive that helped me beat D. Neumann in a lane one. The difference between Silver and Bronze. (winner is non-US: Jamaican) 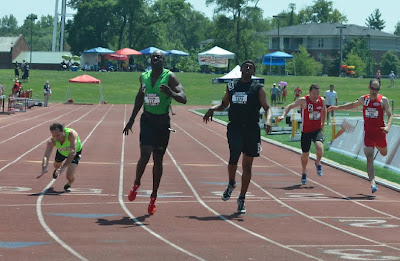 Email ThisBlogThis!Share to TwitterShare to FacebookShare to Pinterest
Labels: injury, track and field