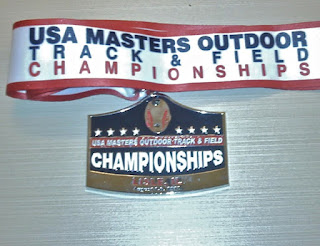 It was even hotter than yesterday, around 90º with clear skies.  I felt a little weak, so I did very little warmup, wanting to conserve energy.   I checked in, retreated to my air conditioned rental car, then 45 min before race time, I did a brief 12 min warmup.   Just a 400m jog and the usual stretching and drills.    Again, retreated to my car.  I got to the check in tent about 20min before race time.  They were keeping us in the shade while we waited for our races.  The atmosphere was a little tense... one of the officials said, "we have water here, stay hydrated."  Rudy Briscoe yelled out "where's the beer?"  Reminded me ... hey, let's have fun here.

As expected I was in lane 5.  C. Moody was on my outside and I saw he had tape on his thigh.  I was a bit nervous getting into the blocks and got a decent start.   Very soon after the start, Moody pulled up so I was on my own.  Felt good, felt too easy, so... I again put the hammer down maybe a little too soon, at about 210m.  I was leading coming off the last turn - and for a moment, I thought "I can win this."   But, Briscoe and Williams in lanes 4 and 3 surged past me running side by side.  I felt ok the beginning of the homestretch but started tying up (again) in the last 20m.  I felt Neumann gaining on me and I wasn't going to let him beat me, so I did a big lean/dive at the line and came in just 0.14 ahead of him.

Again, I should have waited 10-20m longer to make my move.  Tyrone told me I was already ahead of him when I made my move.  He was virtually even with Briscoe and was really pissed that he lost by 0.04.  So, since Rudy Briscoe ran for Jamaica at their Nationals, and at Penn, he's considered a foreigner and I collected the Silver Medal even though I finished third.

I'm satisfied.  It could have been better but also much worse... like last year.   My 400m final today was more than 2 seconds faster than my disastrous performance in last year's 400m national final.

It's been a great season.  I came for a medal and I got one.  I have the 200m tomorrow, and hope my wheels hold together.

Check out my competition.   Can you believe I can run with these guys?