Today went pretty well.   I was the #2 M50 400m qualifier with a 55.81, fastest American behind Briscoe from Jamaica.  I was surprised to win my heat from lane 7 with the World Silver Medalist, C. Moody, on an inside lane.  Obviously, Moody didn't bring his A-game to this race and he was gaining on me at the end.   I gave it 100%.  With some slight adjustments, I possibly could go faster.   Kind of prophetic that I ran my last training run from lane 7.

In lane 7, I could see only Wallack in 8.  He has run under 56 this year so he was good to pace off of.  I  made up the split by the beginning of the final turn, staying really relaxed, and then put the hammer down at about 200m and blew by him easily, I never saw anyone else except for Moody at the end.   I ran out of gas in the last 20m or so, but didn't totally rig up.  Neumann was more than a second behind in 56.95 in third.

Sizing up the 400m finals
Tomorrow, if they seed this as expected, I will be in lane 5 with Briscoe in 4, Moody in 6, Williams in 3.   Not a bad place to be.  Moody - the fastest American - will be right in front of me and I can pace off him.  I hope he doesn't go out seriously fast, I'd be tempted to go with him.   The adjustment I will make tomorrow is patience.  Instead of putting the hammer down at 200m, I'm going to wait til 220m.

There are 2 non-medal eligible foreigners in the finals - I. Smith (UK), and Briscoe (Jamaica).  So, I could finish 4th in the race and still win a medal, or even 5th if I. Smith beats me.  I really only have to beat Granowski and Neumann to win a medal and 2 things are in my favor:  1) they both are running the 100m prelims 90m before the 400m.  (not an issue if they are in shape.. just the heat and fatigue are factors).  2) I beat them both soundly today....  and I really think they were trying since they finished 3rd and 4th in their heats.  I. Smith was faster than both of them today.

Standing next to Briscoe and Moody was a little intimidating... very tall, muscular African men... their asses seemed to come up near my chest.   After today, they don't scare me.

I feel pretty spent but good.   I had a good dinner at one of my favorite college-era restaurants - Fudruckers (fish sandwich and potatoes).   Then I went back to the track to walk lane 5 and relax... go over my race plan and think.  I talked with a few other athletes.   Generally, I just need to relax, conserve, be patient, and when it's time to put the hammer down.... keep form, don't get tense, and dig deep.

Here's a stadium photo from my evening walk ... the point near which the race "begins." 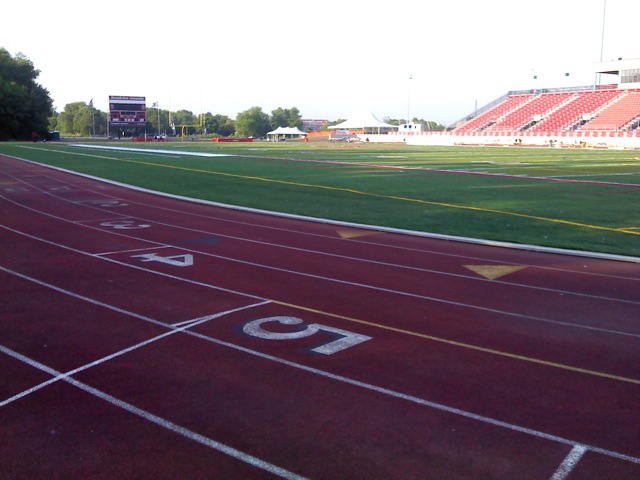