After walking around in the rain at Sewanee's annual track meet on Friday evening, I went to the gym and did 20 x15 sec sprint intervals with 45 sec rest on the stationary bike.

On Thurs., one of the last days of school, the knee started hurting a bit after repeated stair climbs but feels ok now after the workout.

I saw this quote that sums up why some people live better than others.  I think if you say or think this on a regular basis, it's a recipe for eventual problems ...

When people start a sentence with "Life is too short to not... " it's most often to justify an activity that they are addicted to and will shorten their lives.


The Sewanee track meet had some terrible weather, although it could have been worse.  The rain was light and the temperature about 43º.

A first in an NCAA track meet…. At Sewanee’s annual Mountain Laurel Invitational, the meet was small and there were many scratches.  By end of the meet, only one men’s and one women’s 4x400m teams remained, both from the home team. Everyone else had left. So, they ran them together, guys vs girls. They could find only one baton, so the men used a water bottle!  No one wanted to wait for someone to run back to the school and get another baton.  The guys had about 100m on the girls by this first exchange.  I thought the guys might have a shot at lapping the women, but they won by 300m in a not so impressive time of 3:52.   Slower than most of the masters teams I've run with.  (GPTC ran 3:46 at Millrose one yr.)

Great memories ... I got the Sewanee 4x4 team together for this photo at the end of the meet. 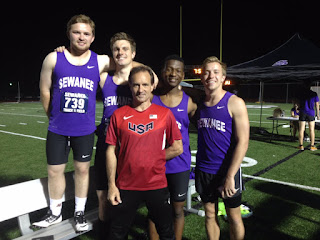