Athletics is an inspiring journey.  Here's a quote from an article I saw on T&F News:


Dear Younger Me: Michael Granville
Service to others is the rent you pay for your room here on earth.  Smile often. Don't take things personal, especially what someone else may do to you. But take what YOU DO TO YOURSELF personal. Life is 10 percent of what happens to you, and 90 percent how you respond. Remember to Follow One Course Until Successful (FOCUS).  Be grateful.  See the beauty in people and act as if that's all you see. Have Compassion. Continue to spread good news about health and fitness with conversation and lead by example.  .... Keep putting in the work. Keep pushing the limits of your dreams!


Below is a pro photo of the NCCWMA 400m final and a tribute I wrote on facebook.

Last week I went 4 days with about zero exercise and went on a few mild carb binges involving bread, pastry, and potatoes.  Nothing too excessive.  I'm still about 147.5 lbs.

Finally, last Friday I biked up the monster hill on Roark's Cove road, always a challenge even when I'm in shape.  I also hit the weight room for some upper body work.  I think it will be at least another 2-3 weeks before I set foot on the track again, and when I do, it'll be just once a week until about Nov.   I hope this end of season doesn't play too hard on my motivation to train.  It just seemed that I didn't reap any benefit from some very hard work at the end of this season.

One additional thing I wanted to mention, it is easy to take for granted participation on this level.  Even one minor injury can take the level of competitiveness or participation to zero.   Not being injured is #1.   In the world of masters track, one or two individuals being injured can promote a bronze medalist to a champion.

I had a few tweaks this season but thankfully no significant injuries.  As life is fragile, the fitness of a masters sprinter is even more fragile.  It is a also a matter of intelligent preparation and luck that one's body can withstand the rigors of training, especially for a 400m.  I was injured a lot in my first year, especially quads and hams.  That probably influenced my shift from being a 100/200 to 200/400 guy.  It is common for many world class 100m guys to start the season racing a 400m.   Tyson Gay, Usain Bolt, and Walter Dix have all done it.  This season, an M60 guy with a lot of experience ran a 100m in his first meet and tore a ham.  Out for the season.  This is an example of poor preparation.   Not real bright to start the season as an older masters with a 100m race.   I love running the 100m but I rarely do so.  Penn Relays is a good time to do it because it's after indoor and well before outdoor Nationals. 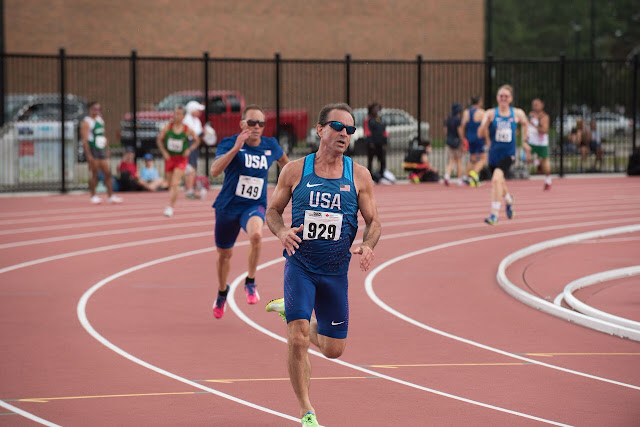 It has been probably since 2013 when I fractured my foot that I took more than a month off from training on the track. It's been a journey and a privilege, not only to put my hands down on the line with the fastest men my age in the world representing the USA, but also to compete in college meets (and not finish last).

My masters track colleagues are some of the best people I've ever met. A brother and sisterhood of speed, where we come together a few times a year like a family reunion, in a different city, or on a different continent as Team USA. The journey of the training and competition, as well as the respect and friendship of my masters track family has given much to my life, a vital balance and compliment to my career of music teaching and performing.

International competition has also given me the opportunity to drive through the French Alps with my dad, to the beaches of Australia, and the streets of Daegu, Korea. I'm a relative newcomer to Masters track, only beginning in my 50s 7 yrs ago, but it's been quite a run: Five National Titles, a World Title, a World Silver and 2 Bronze, NCCWMA Gold, a 4x200m M55 World Record relay, USATF Age Group Athlete of the Yr. Award, a bunch of Team USA relay medals, National Silver and Bronze medals, and the opportunity to join my GPTC teammates at Millrose and Penn Relays.

The great thing about track, is you bring it or you don't. Unlike music, where you're only as good as someone thinks you are, there is no subjectivity in track. My 400m time in Daegu (55.17) was the fastest time in the USA in my age group since 2014, #3 in the world this year (indoor and outdoor), and fastest M55 indoor time in the US in 9 yrs.

As we move up in our age group and make way for the faster and younger, we look toward being 'reborn' every 5 years into a new age group. The medals matter less than the journey. I look forward to maybe one more World meet next year in Malaga, Spain until I enter the M60 age group just before the 2020 World Championships in Toronto. Thanks to the USATF Masters and Team USA. Now, I think I'll take a little time off.