Awards from the National Masters Championships 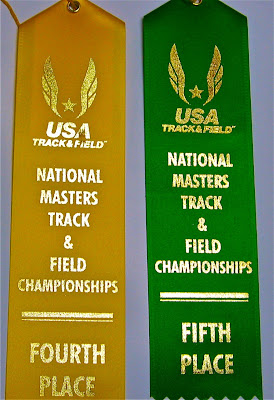 Instead, I get these ribbons for some really bad performances ... and the decision to not run the 100m. I ran my slowest 200 and 400 of the season in the National Championship races.

Just tired. A nagging abdominal soreness. Poor mental preparation and lack of focus at the end of the races. Being bothered by very close competition that caused me to lose my composure and over react instead of maintaining form and relaxation. Lack of experience, coaching.

It still really bothers me. If I had a GREAT meet, I could have walked away with 3 medals.