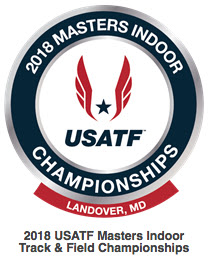 Update: my plane was pulled off the runway for a mechanical issue.  This significantly diminishes my chances for getting to the facility in time to try out the track and pick up my packet.  Will be delayed at least an hour, maybe 2.

Update 2.
Boarding a second plane. Was supposed to arrive 4:35,  will be lucky to get there by 6:35, track closes at 7, won't make it...but may have a shot at getting my packet before 8 when it closes.

Final Update:
After a wrong turn, I made it to the track 5 min before the desk closed, picked up my packet and even got a hasty light workout in on the track, but not in spikes.

The track is a nice surface, but the turns are tight and lanes are very narrow, seem like less than a meter.

Definitely feel the friction when sprinting the turns.  I think times should expect to be 1.1 sec slower than a banked track.  I have never run under 57 on a flat 200m track.  I think a 57 could win this, depending on who's in shape.

Glad I got this workout in, felt ok, just a hasty warmup and a slight sweat.

After finding my hotel, I found the most excellent food right across the street, a Peruvian chicken and fish place.  Wow.   Had just a grilled chicken breast and a salad, was tempted to eat more but I'm too heavy as it is.  Amazingly, after dinner Wed. night, I was pushing 148.  I'll probably race about 145.  Amazingly, I was 141.5 after some workouts last week.  Strange.

I'm fairly sure if I go out tomorrow in 26 flat, I'll rig in the end.  Might be better to aim for 26 high + 29.5 - 30.   This is no Albuquerque.  Kind of unfortunate since the Europeans are now logging times from their championships on banked tracks.