Yes, I made the right decision to see Dr. LaPrade at the Steadman Clinic / Olympic Medical Center in Vail, CO.   My knee is on the road to recovery.   The surgery was a complete success - an effective repair.

This injury, a meniscus root tear was not widely repaired just 10 yrs ago.  It is often missed on MRI images, you really need to know what to look for.  Previously, loose knee cartilage was simply debrided, or trimmed and removed.  The problem with this is the symptoms can be temporarily masked with injection of steroids and lubricants (Euflexxa), but doesn't address the main problem: the meniscus pad becomes uneven, extruded, or missing causing trauma to articular surfaces which ultimately cause articular cartilage to wear and actually come off.  This results in severe joint damage, pain, and the necessity of an artificial knee.  (I have high school friends whose knees were ruined by debriding).  The non-surgical approach is the way this is often handled with non-athletes, but it's never ultimately successful.  It was first suggested by my local orthopedist that I go the non-surgical route.  That would have been a mistake in the long run.


This surgery, with LaPrade's technique, involves releasing the meniscus, placing it in proper anatomical position, and double anchoring the medial meniscus root against raw bone in a drilled tunnel where it can heal.  Meniscus is very slow to heal and in order to do so, must be in contact with some tissue that has a blood supply, as I understand it.  One of the main reasons I sought out LaPrade was his experience and research with this procedure.  I was somewhat worried that my meniscus could have separated too much to be repaired, but that was not the case.  The reason I went to LaPrade was because of his experience.  If he couldn't fix it, it would be hard to find someone who could.  The day I had surgery, Dr. LaPrade did 10 surgeries and 4 root repairs, and appeared at 7:30am the next morning to greet myself and all his patients in our first physical therapy session.  Incredible guy.

I had surgery on Thursday late in the afternoon, spent the night in the hospital.  As surgery usually goes, it was over before I knew it.  One minute I was laying there being prepped, the next minute, I'm waking up to this cute nurse, Jessica.  At one point, I had 6 things attached to me:  IV, O2/pulse monitor, BP monitor, O2 nose piece, nerve block catheter, ice machine cooling sleeve fed by hoses of ice water.   Unfortunately, I did not sleep that night.  Too much noise in the hospital ward, every time I would doze off, I'd wake up a few minutes later.  I got up at 5:30 am and walked to the bathroom. Then had a cup of tea, got dressed and limped off to physical therapy.

My physical therapist was awesome.  Laurie was the leader of LaPrade's PT team and holds a Doctorate in PT.  She was very experienced and briefed me on my manual for the PT routine.  It was a very specific manual with photos and checklists.  I was pleased with the specificity and knew exactly what I had to do.  The whole Howard Head Physical Therapy Dept. (named after the inventor of Head skis and tennis rackets) was very professional.  Most of my therapy for the first 6 weeks is basically protection and getting flexion to 90º+ and full extension flexing of my quad.  It's been going great.

I hired a person from a local service to check me out.  She brought me back to my hotel ...  a nice lady my age who sat with me and chatted much longer than I had hired her to help.  Got my ice machine set up and picked up my prescriptions.  One prescription I hadn't expected was 14 syringes of blood thinner medicine.  I understood it was particularly important for those traveling so before I left Vail, I went into the hotel men's room and injected myself like a junkie and threw the needle away.  I only maintained the injection routine for 4 days until I switched to aspirin.  (I personally think the injection regime was over kill and mainly for liability purposes to prevent blood clots).   I did this after checking out of my stupidly expensive hotel ($870 for 3 nights, and I only stayed there 2).  I had to limp out to my car and was hoping that just sitting there and running it would eventually melt the snow.  No way.  This was about as much as I was able to clean it (remember ... on crutches) before hitting the highway from Vail to Denver. 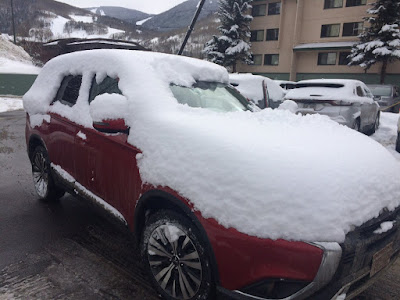 Arrived in Denver early, hung out at Panera for an hour, then dropped my car off, made it to the airport security, still wearing my nerve block catheter ... which looked essentially like a bomb... a control pad with wires attached to a fluid filled sack around my neck.  I was thoroughly frisked.  Amazingly, they didn't make me unpack my hypodermic needles.  I got a golf cart ride to the gate and was very happy to have a premium seat with a whole row to myself.  Frankly, I was more comfortable than my trip to the surgery.  The pain level management through this whole process was super.  I never felt anything close to severe pain.  Nothing more than a 4 out of 10.  Usually when bumping or moving my knee accidentally in a way I wasn't supposed to.  Got a wheelchair ride to the rental car bus and to my car no problem.

Fortunately for me, my friend and fellow masters sprinter Duane met me in the cell phone lot at the airport after midnight Sat night where he loaned me his ice machine.  This was a huge help and has now been part of my nightly routine.  I sleep with my leg in the cold sleeve every night and it has been great!  We chatted about our experiences with injuries and it was good to see him.  We've had some of the same Drs.  Thanks so much Duane, and hope to return the favor some time.

Getting to Sewanee at about 2am, I stopped for a few bags of ice, got home and determinedly carried my heavy backpack, a 10 lb bag of ice in my teeth and Duane's ice machine on the handle of my crutch.  Making it to the top of the stairs was a wonderful relief.  It was very nice to be home.  I got here just in time as the weather had changed, it was 26º in Sewanee but the roads had not yet frozen.  If it were 2 hrs later, I would have had trouble.  Woke up to a dusting of snow and started my wood fire in my fireplace.   The next day I yanked out the catheter and seemed fine.  This trip was quite a thing to pull off by myself, but it went extremely well.

Now it has been 10 days since the surgery and I can comfortably bend my knee 90º and sit in a chair, no problem, no pain. ... just a little at times, usually at night.  Barely noticeable.  Frankly, I feel like I can walk on it right now but of course I'd never do that.  I have at least a month more before I shed the crutches and transition into a brace.

I'm happy to still be relatively fit, weighing only 146.6 lbs, which is great considering very little exercise.  This is due to eliminating bread from my diet a month ago.

I'll be biking by April, running by July.

It's been an unusually long winter vacation, haven't taught in 8 weeks.  Will be returning to teaching on Tuesday and looking forward to it.

Email ThisBlogThis!Share to TwitterShare to FacebookShare to Pinterest
Labels: injury, time off, travel 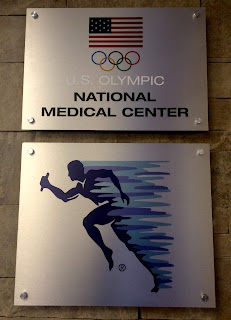 I'm in Colorado at the Steadman Clinic, US Olympic National Medical Center to get my meniscus repaired.  My exam with Dr. LaPrade went well, he answered all my questions.  I was extremely impressed with him and his team.  He seemed like a quiet genius, adeptly going through the images on my MRI, showing me the damage, telling me specifically how he was going to repair it.  He seemed very confident that my repair would allow me to pursue my athletic goals of returning to track training, possibly full scale by fall, and competing in the 2020 season.  Dr. said I'd be running by mid-late summer.  He seemed confident that a reinjury would be unlikely.

I initially was going to add PRP and stem cell therapy, but decided to not go with the stem cell therapy since Dr. LaPrade's own research indicated that it wasn't especially effective and would only contribute perhaps 3-5% toward healing.  I really didn't want to deal with a huge needle in my hip to extract bone marrow for the procedure.  PRP therapy yes. 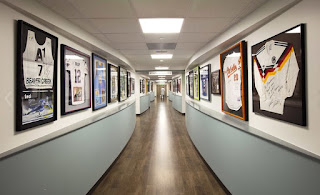 The main 'therapy' for post op meniscus surgery is protection to allow for healing.  Logistically, this has been expensive and complicated... and I know that my trip back will be difficult, and painful.  (It's $817 to stay 3 nights in Vail).  I decided to stay an extra day so I can go back on Sat night and get an extra day of PT.  The trip back involves: driving 90 miles to rental car return, taking shuttle to airport, going on airport train to terminal, getting through security, to the gate, flying 3 hrs, getting through the terminal in Nashville to parking shuttle, shuttle to car, then driving 90m home.  Should be home by 2 or 2:30 am Sunday.  Doing all this with a backpack and crutches.  Can't be too doped up so I can drive.

Looking forward to being fixed, not the process so much.  However, I have 2 days here in beautiful Colorado with a nice SUV to enjoy some sightseeing.  Driving I-70 through the high country is spectacular. 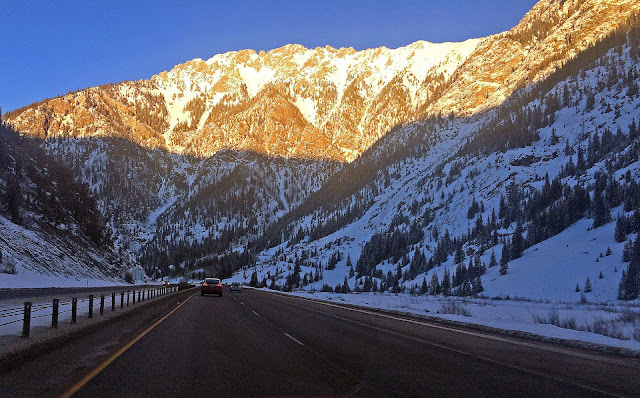 This is a first draft, a preliminary summary of my Masters Track career, (not including the season of 5k road races).   I've looked back through all my races and have come up with these totals:

Event breakdown - races not including relays:

I think this would be double what an active college track athlete would do in a 4 year career.  Averaging over 8 years, this would be more than 14 meets a year.

Season break down - races including relays

Email ThisBlogThis!Share to TwitterShare to FacebookShare to Pinterest
Labels: season summary, track and field
Newer Posts Older Posts Home
Subscribe to: Posts (Atom)
“Keeping your body healthy is an expression of gratitude to the whole cosmos — the trees, the clouds, everything.”