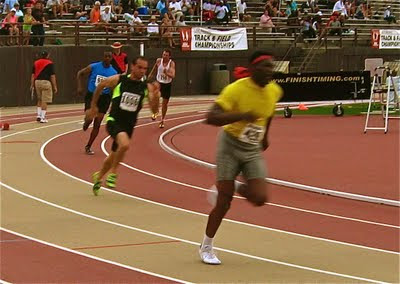 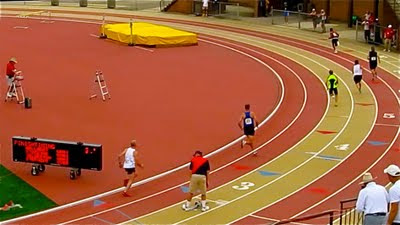 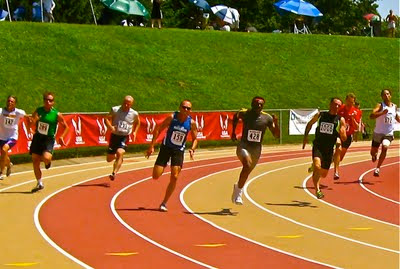 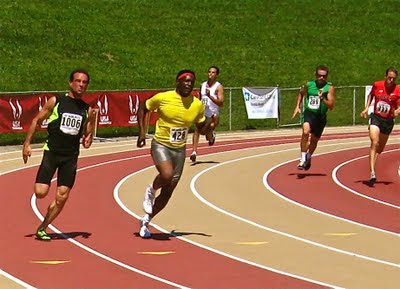 I wish I can say I ended the season on a great note.

I've never been more disappointed in a track meet than I am today - missing a National Medal in the 200m by FIVE - ONE HUNDRETHS SEC. (0.05) to a guy I beat by a half second the day before. I wanted a medal very badly after under-performing in the 400m, but I missed it - painfully, by the slimest of margins.

In general, I ran decent semi-final races and under-performed badly in the Finals.

Anyone reading this blog, don't listen to my advice on how to run a 400m race. I've conclusively proven that I don't know WTF I'm doing. Just because I ran my best time in Raleigh with 25/30 splits, doesn't mean that is the way to do it.

In a nutshell, I took a Fourth Prize and a Fifth Prize in two Masters National Championship races - despite running my slowest times of the season in both races.

Semifinal: Lane 5. I took off fast as usual, and ran a 56.55. It was just me and Ben James, the eventual Gold Medalist leading down the stretch with no one behind us. I had the third fastest semifinal time behind J. Chinn and B. James.

Final: Everything was perfect, I had lane 3, it was a cloudy cooler day. I was really pumped and determined to run a PR. I took off at a crazy 100% pace and was leading the race at the 250m mark. I then hit a wall of fatigue at the 300m - so paralyzing - worse than anything I'd ever felt. I was passed by 3 guys in the last 80 meters and ran the slowest time I've ever run in a 400m race... 57.61. One helluva time to run the worst race of my season. Everything was right except my brain. I ran a stupid ass race, a rookie mistake. I could't handle the adrenalin of the moment. I tried too hard, too much too soon. The thing is, I expended just as much effort running a 57+ as I did the previous races that I had run much faster times. The difference was in the timing of when that effort was expended. Too much too soon.... a losing formula. I am proof of that.

Afterward, James Chinn told me, "It's about a rhythm, sometimes you get it just right." George Haywood told me, you need to really take it easy that first 200 and come closer to more even splits. Someone else told me, "the way you run, you could never run that first 200m too slow." My best time was run in 25/30 splits ... but obviously, that doesn't always work.

Semifinal: In lane 6. It felt good, decent start, Ben James and I were even on the curve and I stayed relaxed and drove all the way through the finish in a PR time of 25.26. I kept telling myself to 'relax and stride' before the race. It worked. I wish I had told myself the same thing in the finals.

Finals: I had lane 3 - good lane. I got a good start, ran a good curve. Me, Ben James, and James Chinn were pretty even coming off the turn. I was trying very hard to run fast and with 50m to go, I had a fairly comfortable lead over forth and was in Bronze Medal position. I glanced to to my left and felt Scott gaining on me. With 20m I felt myself beginning to tighten, and then disaster... I slowed and started to get passed, I leaned for the line hard and stumbled in a dive for the finish ... to no avail. I lost my best chance at a National Medal by 0.05 in a time that was 0.40 slower than I had run the day before. Like the 400m final, my worst time of the season: 25.66.

I was really counting my chickens for a medal and I lost it, painfully right at the end. Adding to the bitterness was the fact that this was probably my last best chance for a National Medal. Because of the World Games, many cancelled on the Nationals and many of America's elite masters were not at this meet. Next year, this age group gets even more competitive. I had my chance and I blew it.

It was a learning experience. After some time, I hope to see that a lot was gained from this journey, much more than the '5 one-hundeths of a second loss of a medal' can take away from me. I hope that I will be not discouraged and continue to try and compete. If I wasn't somewhere near the top, I wouldn't give a shit. But being close and under performing when it mattered most is a bitter pill... especially after all those mornings on the track at 4:30 am.

I've got to catch a plane. More later...