The pressure is off and I'm enjoying my time here.  Tomorrow, not expecting a medal, but I'm hoping I can run a better time than I did today.   This track is not an especially fast track like last yr in Jax.  There is a fast Jamaican here who may beat me as well but he won't finish in the official placing (as a non-US).  I did run faster than him in the semis though.


The big event tomorrow may be our 4x100m relay team which Jim got together to attempt a record.   I think a world record might be tough to get, but if Val and Alan both run true to form, we have a good shot at an American record, which we set last yr in Lyon (47.10).  The WR is a tall order, 46.16 which means an avg split of 11.54.   Probably not on this track.

I chatted briefly with a masters track institution.  Announcer, Peter Taylor, who is threatening to make this his last outdoor Masters Nationals.  He said he doesn't want to go to Baton Rouge next summer.  Hope he does continue.  He has had a very difficult time due to poor communication with the clerk on heats and entries, which makes his job difficult.   If he leaves, he will be missed.  Greatly. 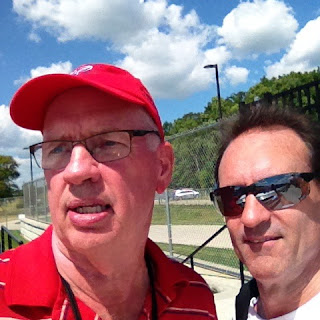 Right now, I'm off to the beach to watch the sunset on Lake Michigan.

UPDATE:
I feel like a douche bag.... I must have left my spikes at the track.   Never have I done this before.  Both pair in the same spike bag.  They couldn't be anywhere else.  These two pair of Pumas aren't made anymore and I've had them for 3 seasons... and three championships.  I hope they are there or I'm screwed.  200m Final tomorrow and 4x100m relay.  Didn't realize they were missing until after midnight.  Probably won't be sleeping well or long tonight... it's 1:30 am and I'm getting up at 6:30am.   Shit.