Sunday started early with the National Championship 200m finals scheduled at 8:45 am.   As soon as I got to the track just before 8:00 am, I walked to the start line to see if they had fixed the markings on the track.  (see previous post on the 4x200m fiasco).  That would indicate that the 4x200m races would be rerun.  And yes, there they were... the stripes of green tape. 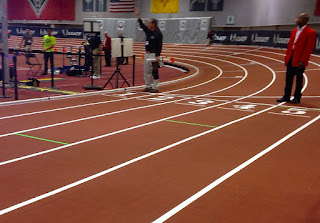 Like I thought.. we were clearly in the zone.  I talked with one of the 'green shirts', probably someone on the USATF games committee.  I asked him about the record and the video.  He said that the record wouldn't count because the track wasn't marked and the video wasn't "officially sanctioned."  It made little sense to me, so I gave him a pissed off look and walked away.  I started warming up for the 200m final.

I finally saw Don and he said he was in for the rerun.  I was worried since he didn't respond to my email.  We all were committed and everyone was there.  So, now on to the 200m finals.

200m finals
I had a good lane - lane 5 in between my main competitors, Alan in 4, Don in 6, Jim in 3.   I felt a bit weak at the starting line as I took my mark.  Definitely a bit sore from the previous days 400, two 60s, and a 200.  I got a decent start and on the back stretch, Alan kicked into 'that high gear' he has and flew by me and led up the hill.  Coming down the hill, both Alan and Don had me by a step or 2.  Coming down the hill, I hit my stride and pulled even with Don, Alan still 2 steps ahead.   Halfway down the final stretch I pulled slightly ahead of Don and he responded.  We fought all the way to the finish and he got me by one one-hundredth (0.01) of a second despite my lean.  It was a helluva race for second.  I really wasn't sure who won the Silver til I saw the board. 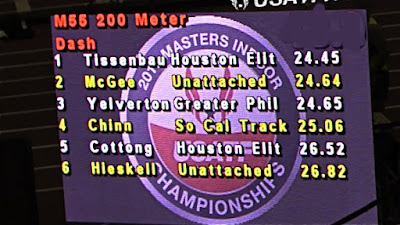 The rerun of the 4x200m relay
I still felt ok, but tired after the 200m final.  Jim was concerned about Don 'disappearing' and joked about putting a house arrest ankle bracelet on him.  We went out quickly and they put us in a race with a weird mix of teams... the awesome SW sprinters M50 and M45 teams, and a women's W55 team.

Don led off in lane 2, ran a decent leg but the handoff to Jim was bad, barely in the zone and it looked like he almost dropped it.  That cost some time.  Jim ran strong and his handoff to Ben wasn't too bad.   Ben came around not quite as fast as the other day and I played it safe and took off kind of slow, he ran up my back and that cost us some time.  I ran as hard as I could and coming off the final turn, I knew we weren't as fast as yesterday because we'd be just 3 sec behind SW, and I was way behind.  I saw the clock and knew it would be close.  As soon as I finished, I ran around and looked at the board, and Jim said something like, "It wasn't pretty but we got it."  Our 1:40.22 beat the existing record of 1:40.58.  Much slower than the 1:37.88 we ran the day before.

It was a pretty spectacular race for the M50 SW team that beat a strong M45 team and broke the WR.  They both lapped the women's W55 team - who also broke their WR.   3 of the 4 teams in this race broke World Records.   I was relieved that we got it.  Getting it by a few tenths is much better than losing it by a few.

After the race, Peter Taylor announced the World Records by M50 and W55.  We weren't mentioned and the scoreboard was wrong as it had us listed as 'M70.'  Kind of an anti-climactic way to set the World Record for the second time in less than 24 hours.  Anyway, mission accomplished and I know we could get it again next year with the right people.

Regarding the relay fiasco, I asked Bill Collins if he had seen anything like this happen in his many years in masters track, he said, "no, not like this."

Conclusion
This meet was a breakthrough for me and hopefully will prove to be a stepping stone rather than a peak.   It encourages me that I may still have some PRs left in me.  And, it proves that my training, especially the increase of tempo workouts, have been effective.   This is my 6th year of masters track and I'm still getting faster.  Faster now at 55 than I was at 50.

Forward
I will probably stick with the 200 and 400 in my first outdoor meet which I hope will be the March 25-26 meet at Vanderbilt.  Hope the weather is OK.  Last year wasn't so great.