This was a memorable day.  I ran 4 races and got to see some great ones.   Bill Collins broke the WR 3 times on this Saturday, I did OK in the 60m, ran my second fastest indoor 200m in the semis - 24.86, and our 4x200m relay team demolished the World Record by 2.8 seconds only to have it nullified in one of the biggest fiascos in Masters Championship history.

60m race
It's a bit early in the season for me to be running short races like the 60m.  But, I qualified for the 60m finals with a 7.81, winning my heat.   This is a race that I love to run but don't really train for.  It really takes very little effort.   It's also a race where some guys are fast who don't look like they'd be fast ... but are.
In the 60 final, I knew I was an outside shot for a medal with Don and Alan probably 1st and second.  I did OK, running a 7.77 but got edged out by Tony F. who ran a 7.70 to get Bronze.   I tied with Marty who also ran 7.77 and when it was taken down to the thousandth, he ended up beating me by 0.004 sec, so I finished fifth.   The stunning thing about Marty is that the dude is about my height and weights 210 lbs, obviously overweight.   When I mention his name to the old timers they say he was a world class sprinter in the 1980's having run 10.1.   That fast twitch is what enables this guy to pull that weight.  He told me that in his hey-day, he raced all the big international meets and even once beat WR holder and Olympic Champion Ben Johnson.   So, I guess I shouldn't feel too slighted to run a dead heat with Marty.  7.77 is off my PR by .07 but significantly faster than I ran at Nationals in '12 (7.98) and '14 (7.91).  Contrary to what my dad said, I think I won the start in the final as evidenced by this photo (lane 3):

I had lane 4, a good lane in a somewhat slower heat. I felt good, energized by the 60m. I wanted a good lane in the finals, and I knew Jim just ripped a 24.90, so I hit it pretty hard. I wasn't going to make the same execution error I made at Vandy a few weeks ago and tie up in the end.  I had Tony D. on my outside and after a decent start, I pulled up along side of him on the back stretch.   Relaxing into the curve, I passed Tony going up the hill and waited until I was coming off the bank to put the hammer down. I accelerated away from the field, winning by 10m+.  It was a well executed race and my fastest indoor 200m on a 200m track. Only a 24.80 on Vandy's 300m track was faster indoors for me.  So, as second fastest qualifier, I'd have lane 5 in the finals.  (They seeded the lanes in this order: 4,5,3,6,2,1.  Way different from Birmingham where it's 5,6,4,3,2,1).

Check out the race video here ... fun to watch when I do it right.

The 4x200m relay
I was asked by Alan if I'd be up for a relay at Nationals.  I said yes, and later Jim called me and said we needed to put this team together because we could definitely break the 4x200m World Record held by Great Britain: 1:40.58.   I suggested Don - the fastest 200m M55 guy in the world in '15.  He agreed.  Then, at the last minute, Alan bailed.   He was our ace in the hole, the World 100m Champion.  We were all a little bummed about the situation so we got Ben J., who wasn't even running the 200m, and who won silver in the 400m.   I noticed Ben had run a 25.69 a few weeks ago so he would have to improve a bit on that if we were to get the record.  After running 3 races that day, I felt as if I still had some juice left, despite not having but a half cup of oatmeal all day.   Our race was scheduled at 5ish.

Jim and I talked and I suggested Don lead off, and I would anchor.   Without a baton, we practiced some handoffs in the warmup room with a water bottle.  It would be Don, Jim, Ben, and me.  The race would be run on a 3 turn stagger, with Jim getting the baton in lane 2 and breaking at the end of the first turn.

We were running against a team 20 yrs younger, M35.  Don got off well and the handoff to Jim was good and squarely in the zone.  Don and Jim both looked strong.  The handoff to Ben was ok and I could tell Ben was giving it everything.  He looked very strong going down the back stretch with his forward leaning style.   I took the handoff, a bit safe ... not going out too fast and took off.   Now, I've looked at the video and timed my split at least a dozen times from finish line to finish line and I'm fairly positive this was the fastest 200m I'd ever run in my life.  The split was somewhere around 24.20, maybe less.   I was definitely gaining on the M35 guy at the finish.  I ran around and looked at the clock.  Holy shit!  1:37.88  We smashed the World Record by 2.7 seconds!!  Jim said he was smiling when I got the baton as he was watching the clock, he knew we had the record if I could bring it home... and I did.

It was thrilling.  Soon as I saw that scoreboard, I ran over to the desk and told Pete Taylor it was a World Record.  He ruffled through some papers and in a few moments, he announced it.  "M55 team has just set a WORLD Record!"   I got together with team, we walked around shaking hands and hugging, Jim said a prayer of thanks, Don said, "Best feeling in the world!"   We went to medal stand, collected medals, and posed for some photos.   Great bunch of guys ... all of us - current or past World and/or National Champions.


I went back to my dad's hotel where the athlete's meeting was being held and I heard some rumor that the record was nullified due to an official's mistake or something with the track.

I went into the athlete's meeting and the issue was hot.  The director Gary refused to answer any further questions about the relay after being pummeled with questions and complaints.  People were pissed.  We weren't the only record to have been affected, but I do think we were the only World Record.

Someone explained to me that the track wasn't marked properly for a 3 turn stagger and all the leadoff runners handed the first handoff at the same line - which was wrong.
BUT... since we were in lane two, the stagger in our lane was only a few meters and the video PROVES that the handoff from Don to Jim occurred exactly in the center of the zone, even though it wasn't marked (until the next day).  Here is the leadoff handoff from Don to Jim.  It occurred in lane 2 about 2 meters at most beyond the finish line.  As the diagram below shows, they nailed it ... the handoff was legal.  The zone is marked in yellow on the diagram. 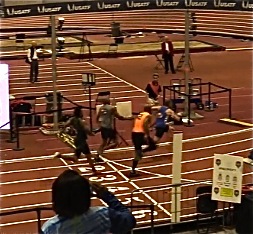 I preserved the video of this race on youtube for posterity.   We all definitely brought it.  Handoffs were ok, everything went well.  We ran our asses off.

Rumor was that we'd get to run it again on Sunday.  I emailed James.  His response was WTF ?  I emailed Don.   He didn't get back to me so I was wondering if he would even want to do it. 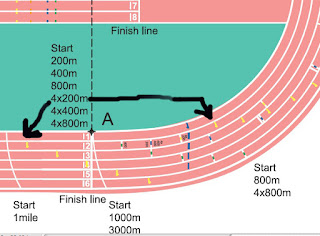 Since we had this race on video, I wondered if we could appeal the issue.  Seems like the evidence was clear.  But, R. Thomas told me that the case was closed and if they considered us, they'd have to consider all of the others and that would be a lot of work and a mess.

Jim really held the group together and provided attitude adjustment support.   I wasn't happy but I knew we could do it again.  Everyone was encouraging.  Randall sent me a text, "you did it once, you can do it again."

John C. told me the officials knew about this before but failed to act hoping no WR would be set.   They were wrong.   Some athletes questioned the officials on this before the start of the race and they failed to act.  Don D. said, "We told them!"    They should have stopped the meet, spent 30 min measuring and taping the zones.   You would expect as much in a sanctioned Championship meet.


I was so agitated by the issue and so hungry by the end of the day, I was wired and didn't sleep really well.  But, I had a 200m final to run around 9 am the next morning.   I just hoped everyone was on board for the rerun.  Even if we didn't have our A game, we should still be able to get it.