First 400m race in almost 2 months.  I got to KY very late Friday, because I delayed my departure to watch the NCAA mens finals (and what a meet it was!).  I knew it was going to be hot, 90º+ so I tried to time my arrival so I wouldn't be there too soon.  Got lost in Danville and finally found the track at about 11:40 am.   When I walked onto the track, I saw they had already started the 400m women's heats, with the men to follow shortly.  I had just enough time to jog to the mens room, do a few leg swings and put my spikes on.  I contemplated bailing out on the 400m, but I wanted that M55 state record, which was only 60.70, set 17 yrs ago.

400m
It was a masters heat with guys 40 and up.  I had lane 4 on the 6 lane track, quickly made up the stagger and never saw anyone the whole race.   Next fastest was more than 12 seconds behind me.  I felt ok, executed pretty well, but tightened slightly in the last 3 or 4 steps and sort of coasted across the line.   That cost me a sub 56.  It was definitely a strong effort, it took me a while to recover and the heat of the infield artificial turf was nasty under the blazing sun.  The odd thing is that in this meet on the same track 2 years ago, my M50 record time was exactly the same: 56.16.   What are the chances of that?  A little better than my last 2 races before Nationals last year - 56.22 and 56.23.

200m
The meet was moving pretty fast so I had just an hour or so between races.   I had lane 5.  Got a great start and felt really strong coming off the turn.  The headwind hit me but I just stayed relaxed and felt full power the whole way, only fatiguing in the last few steps.  25.01 was my best outdoor 200m of the season, and faster than I ran in France.  24.98 would have been better.  My 3rd fastest time outdoors not wind aided.  Interestingly,  I've run three times faster than this indoors, so it's my 6th fastest without wind.  Since I had a head wind, I think I could go faster on a better track.  If I could get a little wind, I might have a shot at breaking the great Jim Mathis's 200m record of 25.0 at the TN State Games in 2 weeks.  That would be an honor, the record is 22 yrs old.  Unfortunately, the track sucks.

I stayed afterward to help Frank M., the meet director, pack up his timing equipment and pick up some trash.  Happy to help out as I had a lot of time. 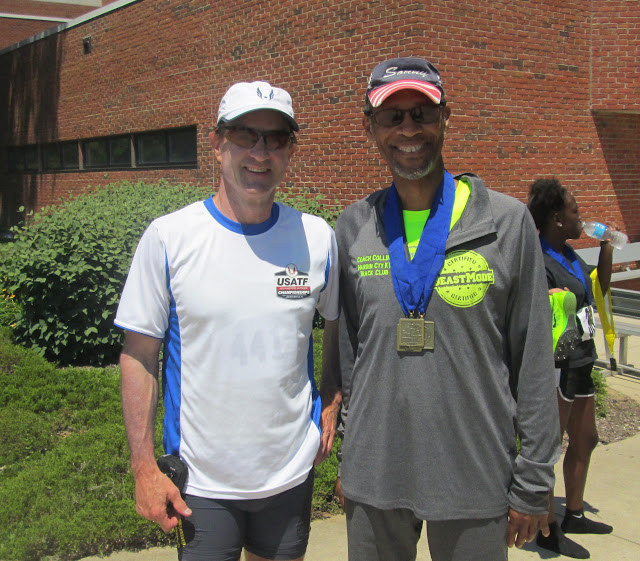 Forward
Only issues from the meet are a sore left ankle, back near my achilles.  Nothing serious.  Expecting to do a volume tempo workout tomorrow, hill repeats Tues., off Wed, and speed work on Thurs.  Today, I'll do abs and some resistance.  I think replacing weight training with 200m hill sprints is working for me.   I got a measuring wheel so I can go to the steepest part of Roarks Cove Rd and measure a 200m.

SE Regionals in Atlanta this Saturday.  Then, TN State Games the weekend after.  After that, I'll get 16 days to prepare for Nationals.  Summer is finally here.   A warm humid air has enveloped this area.  Not as bad as other places, but the dewpoint is over 70º now and it's one of the hottest days of the year 87º.  Still, with a breeze, I haven't yet turned on my AC.
Posted by William at 10:25 AM