This is the 2014 version of the Hoka Clifton (the 'Clifton 1') - 9/14  "Editor's Choice" by Runners World.  It is an ounce lighter than the newer Clifton 2 which reviewers said was 'not an improvement.' 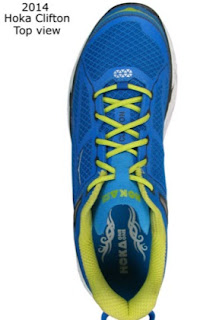 From above, these shoes look like any other light weight trainer.  But from the side, you see the considerable - even a 'maximal' level of cushion.  28 mm of forefoot cushion.  These shoes seem impossibly and astonishingly light for the cushion!  I weighed these, they are 7.5 ounces in my size.... only about 1.8 ounces heavier than my Puma racing spikes, and at least 2.5 ounces lighter than my Saucony Triumph isos.  (By contrast, the Triumphs have only 22mm of forefoot cushion).  They are a few mm narrower at the forefoot than the Triumphs, but still wide.  The heal to toe drop is 4mm.  The heal is generously cushioned ... which makes no difference to a sprinter.   These are becoming hard to find and only available in the blue color.


They fit true to size. Unlike the Triumphs, the upper is very thin, minimal, and breathable.  Still comfortable enough to wear one pair of socks.  The Triumphs by contrast have a very plush upper and can be hot, especially with the 2 pair of socks I use.  The rubber feels a bit soft, durability may be an issue, we'll  see. 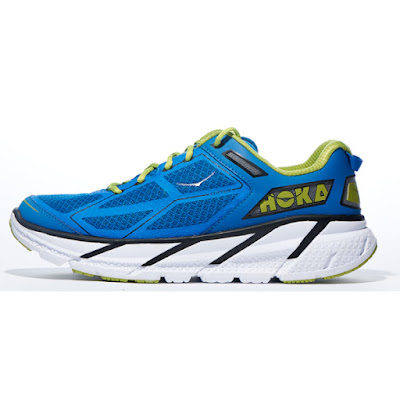 
In my first workout, I was surprised at the level of responsiveness.  The cushion felt more 'springy' than 'mushy.'  I hope this feeling continues as the shoes get broken in.  The Triumphs actually felt slower.  I felt that I needed to really tie down the laces to sprint with these so they didn't move around.  The insole is thin and removable.  You wouldn't think by looking at these shoes that they would be good to sprint in, but they are.  The lightness combined with the springy feel will make these good for both speed and volume workouts... which is surprising, because I expected these to be for longer volume workouts only.


On first impression, these shoes rock!  Too bad these 2014 models are getting hard to find ... and as a testament to their popularity, they are still selling mostly for full price ($130) - $20 cheaper than the Triumphs.  These were the very last Clifton 1's in my size available by the seller I bought from.

Makes me curious about how the even more cushioned Hokas would feel.  The Hoka Bondi has 40mm of forefoot cushion, but with a higher weight penalty, still relatively light for the cushion at 10 oz.

Here is a useful review index.

I may add to this as I continue to train in these shoes.
Posted by William at 8:08 PM

Email ThisBlogThis!Share to TwitterShare to FacebookShare to Pinterest
Labels: equipment